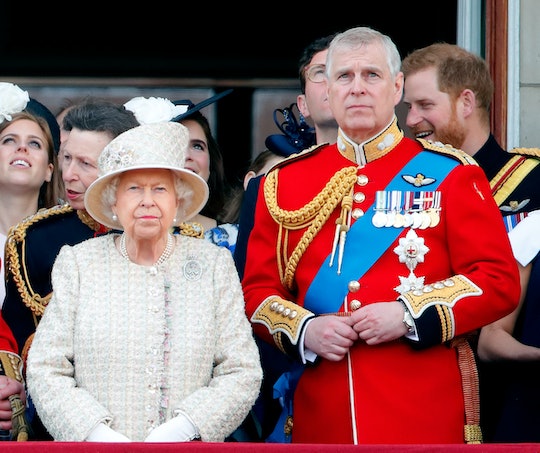 The Queen Stripped Prince Andrew Of His Titles, But Is He Still In Line For The Throne?

He is ninth in line behind baby Lilibet.

Buckingham Palace released a rare statement on Thursday about the Duke of York, announcing that Prince Andrew had been stripped of his military titles and royal patronages amid a sexual abuse lawsuit. “With The Queen’s approval and agreement, The Duke of York’s military affiliations and Royal patronages have been returned to The Queen,” the statement from Queen Elizabeth’s official office read. “The Duke of York will continue not to undertake any public duties and is defending this case as a private citizen.” Now that Prince Andrew has effectively been stripped of his royal patronages, what does this mean to his position in the line of succession? The short answer is not a whole lot.

Currently, Prince Andrew stands at ninth in the line of succession behind older brother Prince Charles, Prince William and Prince Harry, all three of the Cambridge children and both of the Sussex children. While it seems his royal duties will be distributed among other working members of the royal family and he will no longer be allowed to fashion himself as His Royal Highness, according to The Daily Mail, it seems unlikely that he will lose his place in the line of succession.

A change in the line of succession requires an Act of Parliament, per The Royal Household’s website explains. “The succession to the throne can be regulated by Parliament, and that a Sovereign can be deprived of his/her title through misgovernment. The Act of Settlement confirmed that it was for Parliament to determine the title to the throne.”

Prince Andrew might manage to keep his place in the line of succession, as well as holding on to the title the Duke of York, but his life will look quite different in the coming months. Despite efforts to curtail a civil damages claim levied against him by Virginia Giuffre, who alleges that Prince Andrew sexually abused her when she was 17, New York Judge Lewis Kaplan dismissed these attempts. A trial is expected to happen and Prince Andrew will be expected to defend his alleged relationship with convicted sex offenders Jeffrey Epstein and Ghislaine Maxwell.

The Duke of York has largely kept out of the public eye since a controversial BBC interview last August, after which officially stepped down from his royal duties and acknowledged in a statement, “It has become clear to me over the past few days that my association with Jeffrey Epstein has become a major disruption to my family’s work and the valuable work going on in the many organizations and charities that I am proud to support.”