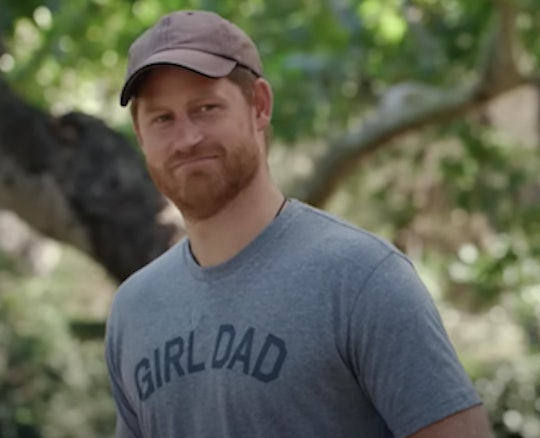 The Duke of Sussex loves him some proud dad apparel.

Fashion and fatherhood go hand in hand in a recently released, tongue-in-cheek video for Prince Harry’s eco-travel firm, Travalyst. The Duke of Sussex sported a “Girl Dad” t-shirt as a sweet tribute to his 11-month-old daughter, Lilibet, with wife Meghan Markle.

Harry may have gotten some good thespian tips from his wife when he flexed his acting muscles in the sketch comedy style video posted on Travalyst’s YouTube channel. In the ad for his sustainable non-profit, Harry kept it casual in a baseball cap, sweats, and sneakers, but it was his grey t-shirt with adorable homage to Lilibet that has caught the eye of many YouTube viewers and royal watchers.

As the Duke of Sussex jogged through the woods, he was humorously accosted by “Rating Agents,” whose job it is to give stars to hotel guests, instead of the reverse. We learn some fun factoids about the eco-friendly royal, including the number of towels he uses to shower (one of out 12), his ability to speak Māori (an Eastern Polynesian language), as well his sweet tooth for some local New Zealand honey. There’s also a pretty funny moment when he’s confused for another famous and fashionable Harry from across the pond — singer, Harry Styles.

This isn’t the first time the Duke of Sussex has sported some proud dad apparel in public. The California-based royal previously shouted out his son when he was spotted with a briefcase with the words “Archie’s Papa” embossed on the leather. The father of two wore a special jacket on a solo walk. Highlighted in bright yellow inside the logo of his Invictus Games jacket was the touching phrase: “I am daddy.”

Between Archie’s recent 3rd birthday, Lilibet’s first birthday around the corner, and the couple’s latest drama with Netflix, Harry and Meghan always have lots going on. But their jam-packed calendar is about to get even busier as the Duke and Duchess are all set to visit the Queen for her Platinum Jubilee, celebrating 70 years on the throne. This will also mark the first time Archie and Lilibet will meet their royal relative. Maybe after their visit, the queen will rock a #1 great-grandma t-shirt too?

More Like This
Why Prince Harry Feels Lucky To Be A "Father With A Platform"
Meghan & Harry Celebrated Their Anniversary As A Family Of Four For The First Time
James Corden Reveals His Kids Have Playdates With Archie & Lilibet
Kate Middleton Explains Why Her Kids Couldn't Attend The Top Gun: Maverick Premiere