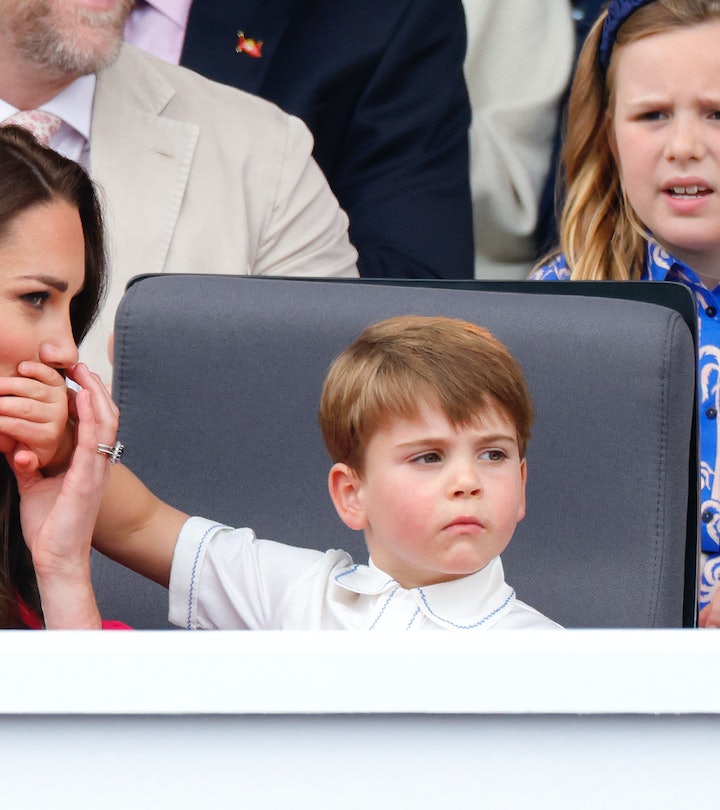 All of Twitter may have become parenting experts about Prince Louis’ antics at Queen Elizabeth’s Platinum Jubilee, but the young royal’s parents don’t seem too concerned.

The weeklong celebration marking Queen Elizabeth II’s unprecedented 70-year reign came to an end this Sunday. But while it was Her Majesty’s Platinum Jubilee, the internet has spoken: Prince Louis was the star. The cheeky 4-year-old (who just so happens to be fifth in line for the throne) kept entertaining social media with his assortment of sassy/funny/generally chaotic faces and gestures. And while everyone broadly agrees that dramatically screaming on the balcony of Buckingham Palace next to his sovereign/Gan-Gan was funny in how incongruous it was with royal decorum, people have lots of opinions about his behavior at the Jubilee Pageant, the final event of the week. But don’t worry, Kate Middleton and Prince William don’t appear to be too bothered by all the commentary.

If you haven’t seen the photos and videos, Prince Louis decidedly did not maintain his composure during the event, and at times could be seen making faces, sassing back, and even shoving a hand in the face of his mother. In other moments, he could be seen chatting with, and then tugging the hair of his cousin Mia Tindall. Reactions in the press and on social media have ranged from amused to shocked to disgusted, to a combination of all three.

Of course, Twitter being Twitter, no one felt the need to hold back in giving their own personal assessment of the situation, and boy howdy was everyone suddenly a parenting/body language/psychology expert. Impressive, given the fact that each of the clips in question was under 30 seconds long...

Often, reaction to the viral moment was one of laughter and/or disbelief.

Twitter user @NotCapnAmerica received hundreds of replies when he posted 19 seconds of Louis acting up. Responses ranged from variations of “typical 4-year-old” to “brat” to “Black/Irish/Asian/ Italian/Hispanic moms would never tolerate this.”

Many folks on Twitter just had fun with it...

Louis is many things, but is mostly expressive.

His faces remained a source of humor, for sure.

Many took the opportunity to highlight how the press would have reacted differently had this been Meghan Markle’s child, due to racist double standard...

Some reaction to #LouisGate took a more serious tenor.

And while plenty of people took Louis’ momentary outburst as an opportunity to clutch their pearls...

Some were disdainful of the child’s behavior.

... many came to the defense of the Cambridges, including a sympathetic Jenn Psaki and Jo Frost, aka Supernanny herself, who noted that Louis “behaved remarkably well,” all things considered!

Look, was it naughty behavior that should be addressed? Absolutely. Is this so outlandish it should be taken as an indication that this child is an irredeemable monster? Or that his mother is a hapless and ineffectual parent who, in fact, leaves him to be raised entirely by nannies? Come on.

Please put yourself in this situation: You, or your child, is 4 years old. For the past week, your schedule is thrown completely off-kilter so that you can be hurried along from one long, boring event to another. There, you’re told to wave to enormous crowds of screaming people while maintaining stately composure (to varying degrees of success) while wearing fancy clothes. A cadre of cameras will be trained on you the entire time, aka you can’t leave/yell/do all that much in the way of discipline. If you can honestly assess this situation and say, “I would never...” or “My child would never...,” then we can only assume one of a few things...

2) you were lucky enough to be blessed with unusually well-behaved children who in no way represent the norm;

3) you have a short memory and have blocked out all the times you or your kids misbehaved.

If you really want to prove us wrong here, we issue this challenge: Go ahead and have your 4-year-old dress up and tell them to sit still and watch the 3-hour-and-14-minute video of the parade, available on YouTube. They need to sit basically still, pay attention the entire time, and you need to parent them as though the entire world is going to be watching you (not to mention the business-like entity behind the royal family known as “The Firm”). Film it, send us the video, and we’ll see how well it goes.

As for the Duke and Duchess of Cambridge? They’ve got a sense of humor about the situation...

The Duke and Duchess joked about Louis’ scene-stealing behavior over the course of the Jubilee...

“We all had an incredible time,” they wrote on their official Instagram page. “Especially Louis... 👀”