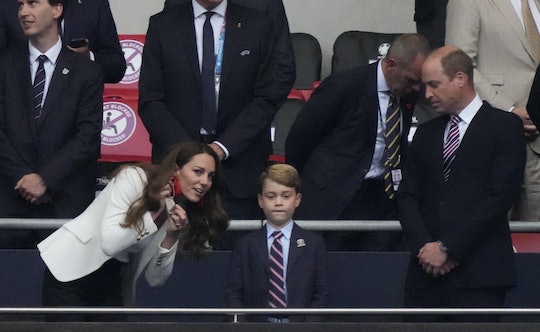 Prince George Was Full Of Emotions During The Euro 2020 Final

“Prince George is everyone in England right now.”

The Duke and Duchess of Cambridge, along with their eldest son, Prince George, were seen at the Euro final at Wimbledon cheering on England before the team lost to Italy on Sunday. Though the English monarchy is famed for its stoicism and “stiff upper lip,” the family ran the gamut of emotions during the tense and exciting game. They cheered, they laughed, and Prince William even comforted Prince George, who was visibly disappointed (in the most adorable way possible) at England’s narrow loss.

The day started out great for the royals and the country they will one day technically rule. The Cambridge crew (minus the two youngest children — we’re guessing Princess Charlotte and little Prince Louis, 6 and 3, were probably deemed too young to sit through more than two hours of a sports match) seemed delighted to be at the game. Prince William and Prince George even wore matching outfits including ties the color of the Union Jack.

During the game, the family could be seen cheering and spontaneously hugging as England scored a goal, which is probably one spontaneous paternal hug more than viewers saw in four seasons of The Crown. At one point, Prince George threw his head back in uproarious 7-year-old laughter and it was, experts would certainly agree, the purest thing ever seen. Just look at him!

It was England’s first Euro final, and they were the favorites to win it. Playing on home soil in Wembley Stadium, the team was facing off against Italy, a team that hadn’t won a Euro final since 1968, but had been undefeated in their last 34 games. But after 120 minutes of play ended in a 1 to 1 draw, the game came down to a shootout — only the second in Euro finals history according to Simon Borg of Sporting News. (Higher drama we couldn’t have hoped for.) In the end, Italian goalkeeper Gigi Donnarumma won it for his team and country.

In the aftermath of the loss, Prince George’s crestfallen but dignified pout was both adorable and emblematic the general mood among England fans. Bravely fighting off tears as he graciously applauded Italy’s win (what a good sport!), Prince William put his hands on his son’s shoulders, obviously disappointed himself, giving the child a affectionate, fatherly squeeze. The wee prince’s quiet devastation has become a social media mascot for despondent English soccer fans.

“Prince George representing the mood of everyone in England right now,” tweeted @NaheedD.

But the royals took the loss in stride. Prince William, who is the President of the Football Association (it’s good to be the future king...) congratulated Italy on their victory while acknowledging the sad day for England.

“Heartbreaking,” Prince William tweeted on Sunday via Kensington Palace’s Twitter account. “Congratulations @Azzurri on a great victory. @England, you’ve all come so far, but sadly this time it wasn’t our day. You can all hold your heads high, and be so proud of yourselves – I know there’s more to come. W”

England’s next opportunity to reclaim the win will be in three years at Euro 2024 in Germany. Prince George (who will be 10 at that point) will no doubt be cheering them on until then, willing them to the game. And maybe next time his brother and sister will join him on his emotional rollercoaster in the stands...