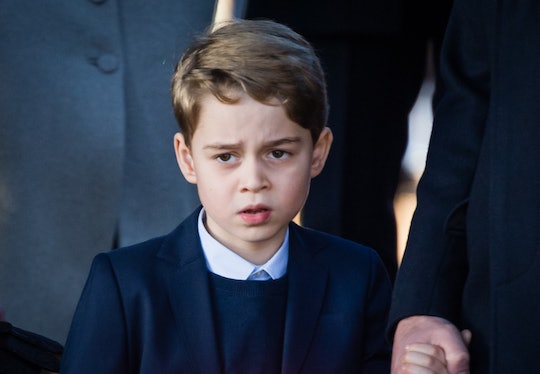 He keeps cleaning up the same street with his school.

Prince William has really devoted himself to raising awareness about climate change. He’s out there, boots on the ground, partnering with notable experts like Sir David Attenborough on the Earthshot Prize, an annual award given to five leaders in environmental impact to end climate change in the next 10 years. But he isn’t the only royal doing his part to clean up the planet. The proud dad explained that Prince George is getting “annoyed” with litterbugs who keep making a mess in the street after he’s just cleaned it, and this is the modern monarchy.

Prince William spoke to the BBC about his 8-year-old son’s most recent outing at school. He and his classmates at Thomas’s Battersea in London have been helping to clear litter away from the side of the road that had been left behind. “I didn't realize but talking to him the other day he was already showing that he was getting a bit confused and a bit sort of annoyed by the fact they went out litter picking one day and then the very next day they did the same route, same time and pretty much all the same litter they picked up back again.”

Picture it; the future king of England rolling his eyes and sighing as he picks up litter on the side of the road. I hope they gave him a pokey stick and gloves.

Prince George is getting annoyed with litterbugs.

The Duke of Cambridge, who is also dad to 6-year-old Princess Charlotte and 3-year-old Prince Louis with wife Kate Middleton, went on to explain his oldest son’s confusion about the return of all the litter. “And I think that for him he was trying to understand how and where it all came from. He couldn't understand, he's like, ‘Well, we cleaned this. Why has it not gone away?’”

This isn’t the first time Prince George has gotten emotional about the way so many people neglect our planet. Prince William shared a story with Attenborough last October about turning off a nature documentary, “So, having watched so many David Attenborough documentaries recently with my children, they absolutely love them, the most recent one — the extinction one — actually George and I had to turn it off, we got so sad about it halfway through. He said to me, 'you know I don't want to watch this anymore.’”

We need to stop littering and clean up the environment. Prince George simply cannot take any more of this nonsense from us.