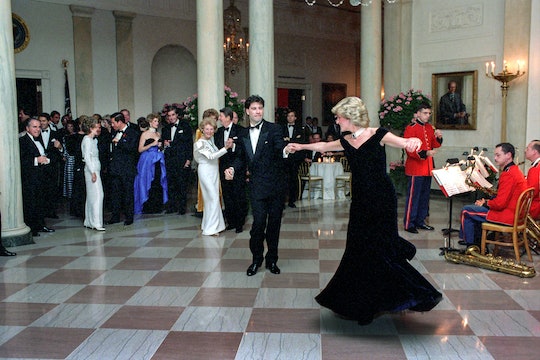 “The princess, her fantasy is to dance with you.”

When Prince Charles and Princess Diana visited the White House in 1985, it was obviously a big deal. The Princess of Wales had already established herself as the biggest celebrity in the royal family simply by way of being herself. An openly loving mother to her two little boys Prince William and Prince Harry, who was just one year old at the time. A philanthropist, a humanitarian, a fashion icon and oh yes; a dancer. Who could forget that. Princess Diana’s dance with John Travolta at the White House in 1985 has a sweet back story which will somehow manage to make you love her more. She was a fan girl, even though she was arguably the biggest deal in the room.

Travolta recently sat down for an interview for the PBS special In Their Own Words: Diana, Princess of Wales, about that special night. “I got a call from the White House to invite me to meet the British royal family with other celebrities, so I went with a very humble attitude that I was an extra in a room of very important people,” the Grease actor explained in a clip shared with People.

It seems he was going to be a bit more than an extra, thanks to Princess Diana and First Lady Nancy Reagan. “About 10 o’clock at night, Nancy Reagan tapped on my shoulder and said, ‘The princess, her fantasy is to dance with you. Would you dance with her tonight?’” Travolta recalled. “And I said, ‘Well, of course. How does this work?’ And she said, ‘Well, at about midnight I’ll come and get you and then I’ll lead you over to her and then you ask her to dance.’”

Naturally, Travolta agreed to ask her to dance, even though he admitted to being a bit nervous. "My heart starts to race, you know, and I tap her on the shoulder and she turns around and looks at me, and she had that kind of bashful dip [of her chin] that she did, and she looked up at me, and I said, 'Would you care to dance with me?'"

They went on to dance for 15 minutes as the floor cleared for them, with Nancy Reagan beaming like a matchmaker in the background. Like a beautiful fairytale.

Princess Diana was an accomplished dancer herself, even performing to Billy Joel’s “Uptown Girl” in 1985 as a surprise for her husband with dancer Wayne Sleep at the Royal Opera House. To know that she was excited to get the chance to dance with John Travolta and that he, like a true gentleman, pulled out all the stops to deliver, is just so wonderful.

A real fairytale. Just like John Travolta said on In Their Own Words: Diana, Princess Of Wales. Available to stream on the PBS app now.