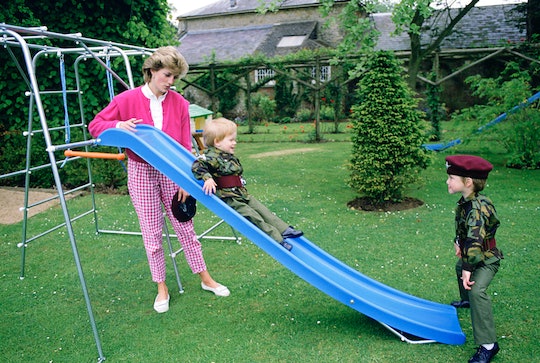 “Alright, Harry will have all the fun then.”

Princess Diana knew how to deal with a kid having a tantrum. Even when that kid happened to be a future king. An unearthed video from the ‘80s sees Princess Diana dealing with Prince William acting up, and it could very well be from 2022 because she was clearly ahead of the parenting curve.

In an old video filmed at Highgrove Estate in Gloucestershire in 1986 that’s currently making the rounds on TikTok, Princess Diana can be seen playing with 4-year-old Prince William and 1-year-old Prince Harry. Helping them on their slide and climbing structure, each of them dressed in little paratrooper outfits and running off some energy.

Right out of the gate, it was obvious Prince William was not terribly interested in the press corps watching him play or being recorded. He stomped away from his little playhouse with a scowl, and even when he was trying to have some fun he was still a classic 4-year-old, eschewing his mother’s help on the slide and being called “energetic” by the narrator of the BBC video, which sounds like code for “a lot.”

Eventually Prince William had enough. When Princess Diana tried to call him to her, he refused to come. And she calmly said with little Prince Harry resting on her hip, “Alright, Harry will have all the fun then.”

Prince William screamed, “No!” and charged after her, while Princess Diana sauntered away and said, “No, it’s alright.”

And that is how it’s done.

Princess Diana’s practical, down-to-earth parenting had a lasting effect on both of her sons, even after her death in Paris in 1997. Prince Harry once referred to his mother as “our guardian, friend, and protector. She never once allowed her unfaltering love for us to go unspoken or undemonstrated.” As for dad-of-three Prince William, he opened up about how his mother’s values influence him to this day, telling Mary Berry in 2019, per Harper’s Bazaar, “She realized it was very important when you grow up, especially in the life that we grew up in, that you realized life happens beyond palace walls, and that you see real people struggling with real issues.”

Princess Diana did not allow Prince William to be the king of the playground that day. She simply walked away from his tantrum and went about her business. Which is perhaps the best lesson for a future king. You don’t get what you want by acting out.

More Like This
Meghan Markle Made A Mic Drop Statement About What Working Moms Really Need
Prince William Opened Up About Living With Grief In A Raw Speech
Kate Middleton Explains Why Her Kids Couldn't Attend The Top Gun: Maverick Premiere
Meghan & Harry Celebrated Their Anniversary As A Family Of Four For The First Time