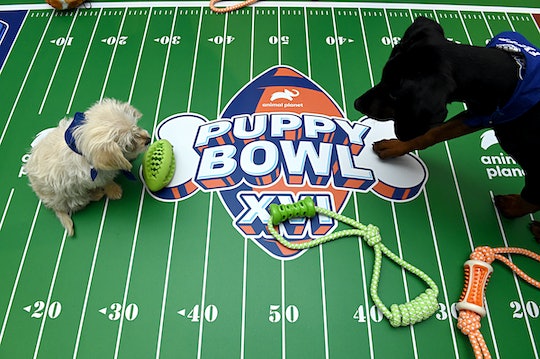 Team Ruff and Team Fluff are back for a 2021 paw-down.

Before you watch the Super Bowl LV, pre-game with a few cute pups. Animal Planet's Puppet Bowl will air as planned despite the pandemic, according to the Discovery Network. Puppy Bowl XVII is a three-hour special event that will premiere Sunday, Feb. 7 at 2 p.m. eastern time.

Other than watching adorable puppies do fun tricks and chew on squeaky toys, the Puppy Bowl raises awareness of pet adoptions and highlights the work of animal shelters and rescues. All 70 puppies featured in this year's bowl are from 22 different shelters and are up for adoption.

The lineup for Teams Ruff and Fluff are already out. Pups include Bingo, Chip, Theodore and Yogi for Team Fluff. Bluey, Tank, Tina and Vinnie are ready to duke it out on Team Ruff.

Discovery+ is hosting a poll to vote for your favorite puppy popularity playoff pair. Hopefully, the ultimate prize will be that all 70 puppies will have a loving home. According to the press release, for the past 16 specials, Puppy Bowl have seen a 100% adoption rate for the puppies and kittens featured.

And if dogs aren't your cup of tea, there's a halftime show just for cat lovers, featuring kittens. (The doggy players will be in their locker room when they are on the field of course.)