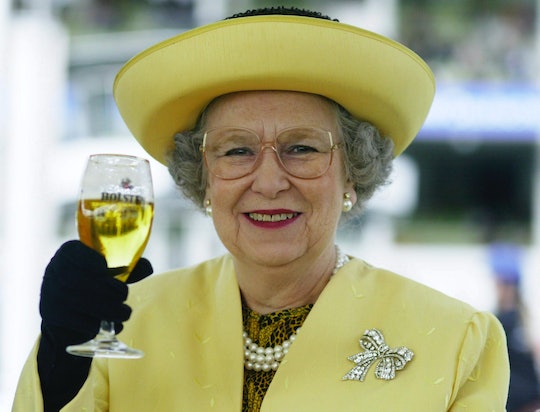 She’s always been a fan of a good cocktail.

Listen, I know the booze market has really been saturated with celebrities. George Clooney’s Casamigos tequila, Ryan Reynolds’ Aviation gin... but this one is different. Queen Elizabeth has launched a beer and before I tell you more please let the image of Her Majesty kicking back and cracking open a cold one bring you the same level of joy it is currently bringing to me.

Buckingham Palace recently announced that Queen Elizabeth has given approval for two different beers to be launched from her Sandringham Estate in Norfolk County. The two beers, one a traditional English bitter and the other a golden IPA, are being sold at the Sandringham Estate gift shop for $5.50 a bottle. Both beers were created from a plant found on the estate called Laurette Barley, and the label on each reads, according to People, "Made in the UK for the Sandringham Estate. The Sandringham Estate is a wildlife haven for Pheasants, Hares, Owls and many other species thrive in the wood and farmland habitats."

The real question is whether or not Queen Elizabeth was involved in the taste-testing of these two beers...

Queen Elizabeth is no tea totaler. The 95-year-old great-grandmother loves a good cocktail, and is rumored to be a particular fan of drinking a gin and Dubonnet on a daily basis, as per Marie Claire. So perhaps it should come as no surprise that her recent foray into beer is not her first experience with giving her approval to an alcoholic beverage. Sandringham Estate has a gin distillery on site where its Celebration Gin is created and sold in the gift shop. Her Majesty is such a fan of gin, in fact, that she also has two brands made at Buckingham Palace. The original Buckingham Palace Dry Gin and a new sloe gin made from hand-picked sloe berries on the grounds of her London home. The new, sweeter sloe gin, which sells for $41 a bottle, go towards paying for the Queen’s art collection.

While Her Majesty loves a cocktail, it was her late husband Prince Philip who reportedly loved a good beer. His grandson Prince Harry even referenced this in his memorial tribute last month, writing about his “cheeky” grandfather who he remembered with “beer in hand.”

Perhaps this new endeavor into beer making is another tribute to the husband she lost. You just never know.

More Like This
You’ve Probably Been Pronouncing “Lilibet” All Wrong
10 Ways Prince George & Prince Louis Are So Different From Each Other
Meghan Markle Calls On Men "To Be Vocal" In The Aftermath Of Roe v. Wade Ending
Princess Charlotte Got So Excited To Shake A Royal Fan's Hand