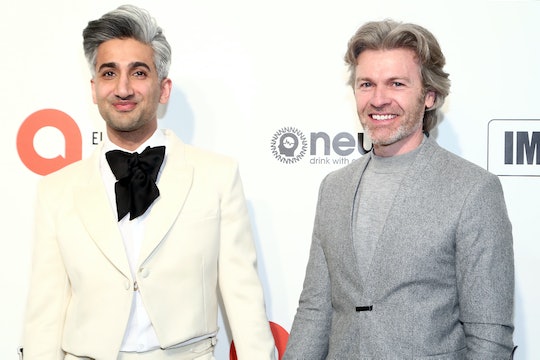 “Something we’ve wanted for soooo many years.”

Please prepare yourselves for the first baby in living memory who will most definitely perfect the signature French tuck: Queer Eye’s Tan France is expecting a baby this summer, and you know his little one is going to be an instant style icon.

France took to his Instagram account on Tuesday to share the news that he and his husband, illustrator Rob France, are expecting their first child together after more than a decade of wedded bliss. He posted a beautiful topless photo of himself, covering his chest and holding his baby’s sonogram photo in front of his abdomen, with the caption, “So happy to finally share that WE’RE HAVING A BABY!! No, I’m not pregnant, despite this VERY realistic pic. With the greatest gift/help of the most wonderful surrogate, Rob and I are lucky enough to be on our way to being parents, this Summer. Something we’ve wanted for SOooo many years. Our hearts are so full right now. I cannot wait to hold this baby, and to show him so much love.”

So here is what we know; the baby is a boy. He is due this summer via a “wonderful surrogate.” And he is destined to be a trendsetter, whether his parents choose to share photos of him on Instagram or not.

Tan France is expecting his first baby with husband Rob.

Some of France’ Queer Eye co-stars were quick to offer their congratulations, like Jonathan Van Ness who wrote, “so happy for you!!! I’m so proud of you and Rob you are two of the sweetest most genuine people in the world & this is the most exciting news eve,” while Karamo Brown noted, “Yay!!!!!!! Uncle Momo is going to spoil this baby!!!!!” Bobby Berk teased France about the picture, writing, “Hahahaha. The joy of this post outshines the creepiness of this pic.”

As for France, he was sure to remind his fans that the photo was just “a bit of fun” before adding “I so wish I could carry my baby.”

The couple have been hoping to expand their family for some time now. At least that’s what the Queer Eye style consultant told the Press Association in 2018. “If I want to have children I want to talk about it and nobody can say it’s wrong and get away with it,” he explained at the time, “I think that just by the nature of our show and by the nature of who I am, I think that helps lend a light and shine a light on a method that isn’t discussed as often as it should should be.”

As for how many kids the couple wants, France said at the time that he would like “six. I will settle for minimum four. And no, six is not loads. It’s just enough.”

It sounds like this is just the first step on a big family adventure for these expectant parents. And we’re glad to be along for the ride.