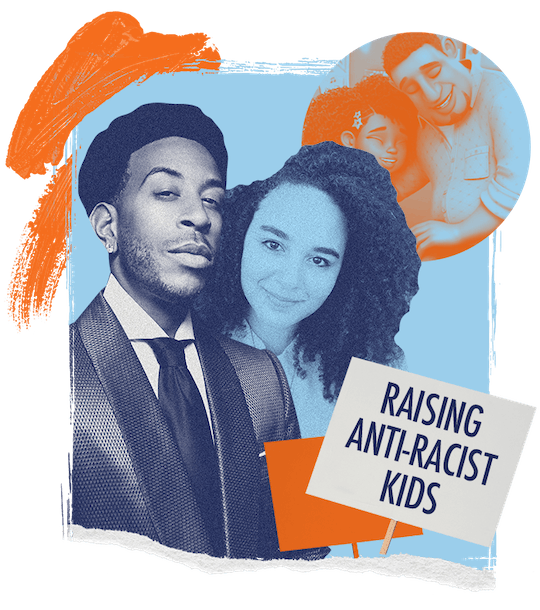 A chat with the visionaries behind the hit Netflix series Karma’s World.

My daughter was about 2 years old when she started noticing my afro. At bedtime, she would sit on my lap facing me and sink her chubby fingers into my hair, giggling as she lost them in my gaggle of curls. Seeing her delight in my hair drove home to me the power of surrounding her with people and images in the media that reflect the beauty of her Blackness. So imagine my delight when we discovered Karma’s World on Netflix. From creator and executive producer Chris “Ludacris” Bridges, actor, producer, entrepreneur, philanthropist, and, of course, one of pop music’s most successful recording artists, Karma’s World is an 11-minute episode series inspired by Bridges’ daughters that focuses on celebrating differences, body positivity, joy in music, and friendship, among other themes.

“I needed to see more representation of ourselves on screen, and I know that the things that my daughter was going through dealing with everyday life — I’m sure so many other children were going through at the same time,” Bridges, who is a father of four girls — ages ​​20, 8, 7, and almost 1 — told me over a Zoom call last week. “And I wanted to be able to provide a voice for them and to try and change the world for the better. ’Cause as soon as you have children, you start thinking not so much about yourself and more about them and the next generation and the generations to come.”

The series follows Karma Grant, a young aspiring musical artist and rapper, as she navigates life while pouring her soul into songwriting with her special brand of courage and humor. Using music to change the world is her superpower. Also last week, I chatted with Halcyon Person, Karma’s World’s Emmy- and NAACP-nominated head writer and co-executive producer, about creating a show that brings such resonance for little kids of color all over the world. One thing that was clear in both my conversations is how focused each artist is on their goals for the show. Person shared that during one of their very first meetings, Bridges told her, “I’m here to push hip hop culture forward with this show.”

“No one had ever created a hip hop musical like we were making,” says Person, who was excited to figure out how an “incredibly talented musician, musical genius rapper like Ludacris” would work with a children’s media company and a bunch of children’s TV writers. “That was the first time anything like this had ever happened before,” she says. “I’m proud of the fact that I think we built a blueprint for how shows like this could work in the future.”

Person stressed to me that the Karma’s World team is always asking themselves, “What does a show owe its characters? What does a show owe its young, Black lead; its protagonists? How do we not just see a character like Karma on screen, how do we serve her? And how do we serve the young girls and boys at home, specifically young Black girls, but really everyone, with a show that can be meaningful and powerful?”

One example of how this manifests, says Person, is the care, time, and attention that their animation studio took in creating not only Karma’s hair, but her mother’s tighter curls, her dad’s looser texture, and the hair of the rest of the show’s Afro-Latinx and South Asian characters, even when the animation world considers these textures “harder” to do. “Something I’m quite proud of is that we’re getting to see [Karma] have so much joy while she’s wearing her beautiful curls,” she says.

Any parent can tell you that kids are the toughest critics — and Bridges’ girls get to see the show in “every stage of its making.” And yes, indeed, they give him “all types” of feedback. They do say they love the show, he says, but their behavior is what really tells him how they feel. “They can tell me one thing, but me seeing them wanting to watch it over and over again is something totally different,” he says. “And I couldn’t be more proud, because it starts in your own household. It starts in your neighborhood, before you can make the world believe something. You got to make sure your household believes it first.”

Both Bridges and Person acknowledge that, while a lot has changed since they were kids when it comes to representation in children’s media, there still hasn’t been enough progress. It’s not nearly enough.

“I love to celebrate. I’m all for patting ourselves on the back and saying, ‘Here we are,’ but I think there’s a lot more we can do,” agrees Pearson. “That’s what we’re trying to do at our company — say, ‘How do we push further? Yes, we’re seeing this representation on screen. How do we push to make sure that representation is nuanced and complex?’” As part of this mission to push further and make real change, the duo recently released a delightful kids book called Daddy and Me and the Rhyme to Be, just in time for Father’s Day.

As Father’s Day weekend approaches, Bridges says his ideal day could involve all his kids cooking him a meal together. But more importantly, he says, it’s just seeing them “become their best selves.”

“There’s no one day in particular that could help me to do that,” he says, but it’s all part of the parenting journey — seeing his kids reflect back the values he tries to instill, the “morals and lessons and life lessons” that he’s trying to teach them. “Being able to sit back and watch the fruits of my labor and the things that I’ve tried to instill in their brains. Them being able to recite certain sayings back to me and their actions. Showing [that they’re] becoming self-sustaining young ladies and young women. With manners, with morals, those things.”

And me being a girl dad, what more could I want?

He pauses for a minute, then adds that would take up half of his ideal Father’s Day. The other half? “Me just being able to chill and do whatever I want, like go smoke a cigar and have a drink somewhere where they can’t be,” he laughs. “That’s my ideal Father’s Day. Half of the time with them, half of it by myself with the fellas. I think all the fellas deserve to get together on Father’s Day at the end of it to just have guy time.”

Bridges is a world-renowned rapper and movie star. What does it mean to him to now be somebody who creates and advocates for children’s entertainment that truly represents who they are? “Oh man. We’re always looking for our purpose — it just gives me a stronger sense of purpose,” he says. “It means the world to me that I can create something that not only my family enjoys, but that families worldwide are able to enjoy. And it’s a sense of empowerment that is being instilled in kids, especially young girls. And me being a girl dad, what more could I want? Knowing that when the time comes that I have to leave this earth, I’ve left so much to give back to it, especially my own community… that helps me sleep very, very good at night.”