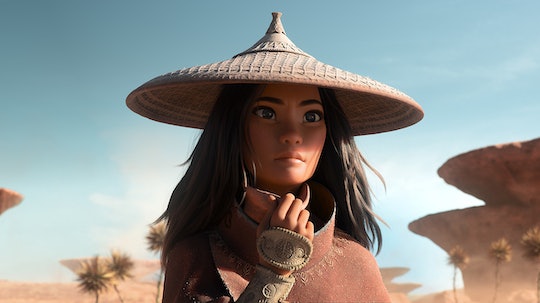 Raya From Raya & The Last Dragon Is Officially A Disney Princess

A new Disney princess has entered the chat...

Belle, Aurora, Ariel, Tiana, Mulan, and more Disney princesses have welcomed a new member to the club. Raya from Raya and the Last Dragon is officially the newest Disney princess, and the first Southeast Asian character to hold the royal title.

Disney recently revealed that Raya would be joining the Disney princess lineup ahead of World Princess Week 2022, a week-long event of activities at Disney Parks, according to WDW News Today. Raya will be part of the celebrations alongside other Disney princesses. The announcement has been celebrated on Twitter. “Diversity in cinema absolutely matter!” one fan tweeted. One more said, “Finally, I’ve been actually waiting for Raya to get the credit she deserves.”

Raya and the Last Dragon, which premiered on Disney+ in March 2021, tells the story of Raya, “a lone warrior” who must “track down the legendary last dragon to restore the fractured land and its divided people.” Throughout her journey, Raya learns “that it’ll take more than a dragon to save the world — it’s going to take trust and teamwork as well,” the movie’s synopsis reads. Raya and the Last Dragon stars Kelly Marie Tran as Raya, as well as Awkwafina and Sandra Oh.

“There is this sort of culture of wanting to be a princess from a very young age,” Tran told Vanity Fair in a March 2021 interview. “When you’re young, you don’t actually really know why you want to be like something you’ve seen. Or someone you’ve seen. But it definitely was a source of desire for me.”

The Last Jedi actress went on to speak about the cultural representation of her role. “I want to live in a world where every single type of person can see themselves in a movie like this. There’s a lot of work to be done in that respect. I’d love to see a Disney warrior who — I don’t know, can I say this without getting in trouble? I don’t care — is openly in the LGBTQ community,” Tran said, speaking on Raya’s queer appeal. “I would love to see representation in terms of someone who maybe isn’t able-bodied. And I’m hopeful. We’ll see.”

Tran added that voicing the character Raya was also empowering, in the sense that she encouraged you to openly and unapologetically express your emotions. “Raya is just angry — and letting her be angry, I don’t know that we’ve seen that before,” she told Vanity Fair. “I don’t want to generalize about what Disney princess movies are, but there is a very specific type of woman that has stereotypically been conveyed within that world. So when I saw Raya get angry, it felt so...I felt so empowered by it. Like, it’s just giving a woman permission to feel what she’s feeling.”

Raya will officially join fellow Disney princesses for World Princess Week 2022, which takes place from Aug. 21 to 25 at Disney Parks.

More Like This
Here's Where The 'Hocus Pocus' Characters Are 30 Years Later
10 Facts About 'The Nightmare Before Christmas' That May Surprise You
Watch An Exclusive Clip From Trick or Treat Scooby-Doo!
Disney's Upcoming Mufasa Movie Will Tell Us The Origin Story Of Simba's Dad