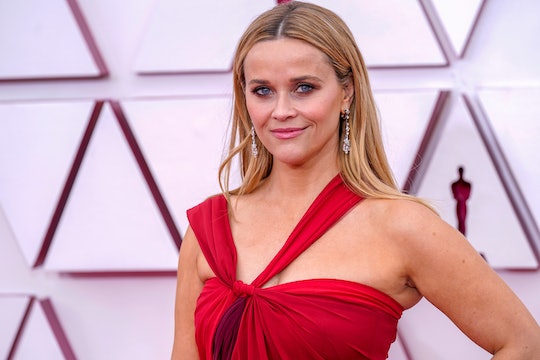 No one is saying that Reese Witherspoon doesn’t love to be with her kids. She positively gushes about her 21-year-old daughter Ava, 17-year-old son Deacon, and 8-year-old son Tennessee on a regular basis. But let’s face it, like most moms, she’s just pretty happy to have the house to herself again for a minute. As evidenced by her little back-to-school celebration on Instagram. If you want to see what true joy looks like, it is the Big Little Lies star dancing around her kitchen in a bright yellow track suit, drinking coffee and eating cake for breakfast. Honestly that’s what joy looks like for most of us.

Last year around this time, Witherspoon was looking at a very different school year ahead like millions of other moms. A year of homeschooling. At least for her youngest son Tennessee, who made how he felt about the situation abundantly clear in an Instagram post where he was hanging upside down from several different structures and apparently doing zero work. “Home school is going great,” Witherspoon captured the post last August.

Now, however, things are looking up. Way up. Dance party in the kitchen kind of up.

Witherspoon captioned her joyful back-to-school post, “When the kids go back to school and you have the house to yourself…” and she looked like she really meant it. Especially once she started digging into that delicious cake sitting on the kitchen counter.

Reese Witherspoon is having a kitchen dance party now that the kids are back at school.

While she might be celebrating this morning, the Morning Show mom struggled mightily when her daughter Ava headed off to UC Berkeley for the first time in 2019. She told Ellen DeGeneres on Ellen at the time, “I might have gone into her empty room, laid down on her bed and cried when she went to college,” which is totally understandable, of course. Perhaps especially when it’s the first time around.

Two years and one terrifying pandemic later, Witherspoon is embracing the power of being alone in your own home when the kids are at school. This was a year when moms were expected to really test their mettle in ways that were simply too much for so many of us. A year when we were asked to be the keeper of everyone’s pain and fear and secrets and just keep going.

A little light at the end of the tunnel looks pretty good right about now. Embrace it, a la Reese Witherspoon. It’s a beautiful thing.