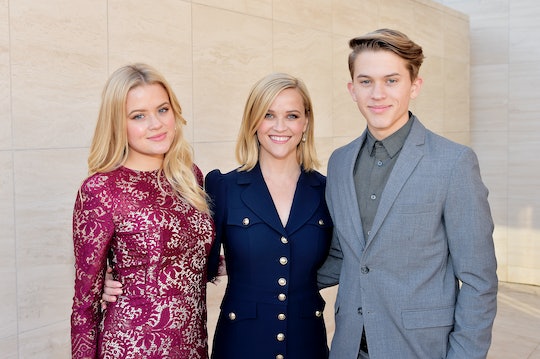 Is it just us or does Deacon look a lot like his dad, Ryan Phillippe?

A lunch selfie Reese Witherspoon shared over Instagram on Wednesday had fans doing a double-take. But The Morning Show actress wasn’t lunching with her ex-husband; she was with her son, 17-year-old Deacon Reese Phillippe, who as it turns out looks just like his dad Ryan Phillippe.

“Making sure we get some good photo options in case we ever need an album cover for the mother x son band I’m trying to convince @deaconphillippe to start with me,” Witherspoon wrote in the photo’s caption.

While Witherspoon wears a gingham dress and straw sun hat with a wide and floppy brim in the photo, her son radiates coolness in a plain white tee and seemingly effortlessly swooped back hair. One look at photos of Phillippe from the late ‘90s and early 2000s and it’s clear his son inherited his eyes, chiseled jawline, and smile.

However, some fans on Instagram seem convinced the 17-year-old looks more like his mother than his father — and it’s hard to deny that there’s definitely an uncanny resemblance between the two. “You look identical!” one fan commented on Witherspoon’s selfie. “Twins!” another declared.

But whether you think Deacon is the spitting image of his dad or his mom, this isn’t the first time fans have noticed that Witherspoon and Phillippe appeared to copy-and-paste their genes onto their children. People have long believed the couple’s 21-year-old daughter Ava is Witherspoon’s doppelganger.

According to InStyle, Phillippe and Witherspoon met in 1997 at a party organized for Witherspoon’s 21st birthday. A year later they were engaged and in June 1999 they officially tied the knot, roughly three months before daughter Ava was born. The couple then welcomed Deacon in 2003 before divorcing in 2006. Witherspoon has since married Jim Toth and the pair welcomed a son, whom they named Tennessee, in 2012.

Despite divorcing, Witherspoon and Phillippe have remained amicable and are known to shower their children with love. When Deacon turned 17 last year, People reported both Witherspoon and Phillippe shared heartfelt birthday messages praising the teen for having grown into such a remarkable individual. While Phillippe described Deacon as “extraordinary” and “the coolest,” Witherspoon noted it had been a pleasure watching him grow into someone “who is always curious and endlessly creative.”