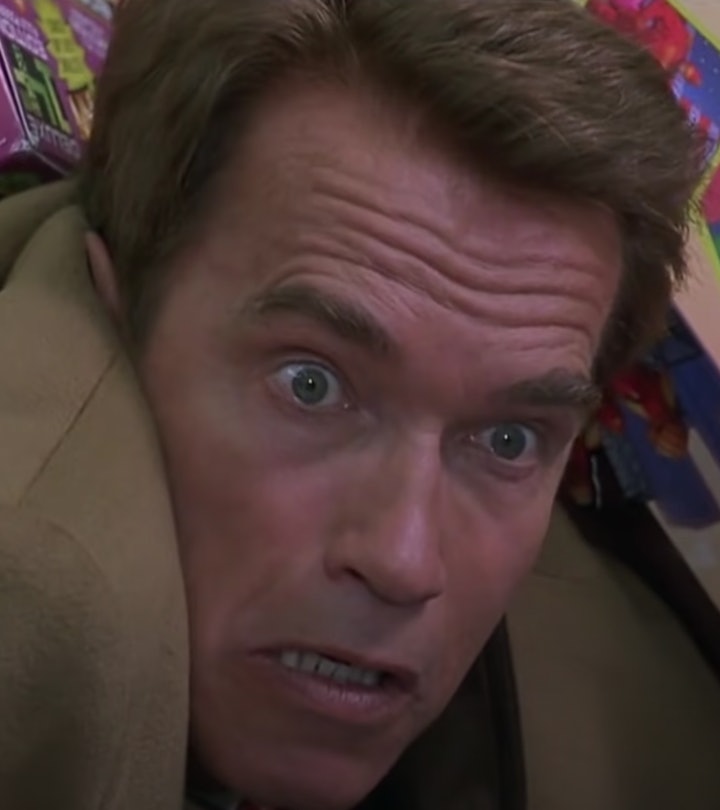 Seriously, you’re gonna check on your kid’s most wanted gift by the world’s most unreliable dad on December 23.

It’s the most wonderful time of the year... where we take terrible fathers and turn them into heroes with one Christmas story. Look, I’m all for Christmas redemption stories. It’s kind of the point of most Christmas movies, but I rewatched Jingle All the Way as a mom and I have so many thoughts. Starting with Ted Maltin (Phil Hartman) being a total babe and also kind of being pissed off at Liz Langston (Rita Wilson), the mom in Jingle All the Way. It’s not her fault her husband sucks, but I’m also in disbelief that she put her son’s only Christmas wish in the hands of Howard (Arnold Schwarzenegger). Secondly...

I would’ve been way nastier to Howard when he missed the karate class.

Dude literally misses so much stuff, his secretary has to come in with freaking cue cards to remind him to leave on time for his son’s karate class and he just... doesn’t? Because he’s trying to sell mattresses in the middle of his company Christmas party? When he finally does show up at the school, there’s not even a single car in the parking lot or person around and he still runs all the way into the gym where a janitor is cleaning up before he realizes he “didn’t make it.”

But sweet Liz’s only thing is to ask him if he has any idea what time it is when he gets home, and then tell him not to apologize to her, but to their son Jamie. I... would’ve had so many more words to say.

Why the hell did she trust him with their son’s only Christmas wish?

There’s a “cute” scene where Howard makes up with his son Jamie and *suddenly* finds out what his son wants for Christmas — a Turbo Man action figure. Um... what?! It’s December 23. Has this man literally not spent a single second with his son in the last three months? All this kid does is talk about Turbo Man and watch Turbo Man. He says everyone’s going to have a Turbo Man and anyone who doesn’t is a loser. The kid eats Turbo Man cereal! Howard literally is just now learning, two days before Christmas, about the coveted gift his son desperately wants.

And then we find out that Liz asked him “weeks” ago to pick up a Turbo Man for Jamie’s Christmas and then she... never followed up on it?! You have one kid! It’s his only Christmas wish! You know your husband sucks and can’t even leave on time for karate class! You seriously trusted him to get the world’s most popular toy — your son’s only Christmas wish — weeks ago and never checked in on it!

This is the part I can not get over. It’s the biggest plothole in the whole movie. Even bigger than the fact that Howard gets to be Turbo Man by pure luck in the Christmas parade and gets to save his son using jet packs through the skyline of St. Paul, Minnesota. No mother would do this. No mother would ask her husband “Hey, can you pick up that super popular toy that’s like, all the rage for kids? It’s the only thing our kid wants for Christmas” and then wait until December 23 — DECEMBER 23! — to be like “Hey, you got our kid’s Christmas gift, right?”

Liz should’ve 100% had an extra one hiding in the closet. This could’ve been a great test to see how much Howard a) listens and b) gives a sh*t about being a parent. I can fully admit that I do most of the Christmas shopping for our kids, but if I ask my husband “Hey can you pick up that toy they wanted” he would absolutely do it because he knows it’s important and also because I WOULD ASK HIM THAT SAME NIGHT IF HE GOT THE DAMN TOY OR NOT.

This is just bad planning on Liz’s part. Your husband misses the Christmas Eve parade every year. He’s been to like one karate class. He doesn’t even know who Turbo Man is and your kid wears Turbo Man pajamas while eating Turbo Man cereal.

He sucks. Liz should never have trusted him.

The late Phil Hartman, as Ted, is kind of the hero here.

Sure, when he puts the star on top of the Christmas tree, that’s kind of overstepping, I guess. But when he points out that Howard’s never even around to spend the holiday with his family, where’s the lie? If I had a cute neighbor who came over — even with his ulterior motives — and offered to finish my baking and watch the kids so I could take a hot shower, I would be like, “yeah, OK, that sounds good.” Ted is straight up spreading Christmas cheer for the entire neighborhood and if Liz had asked him to get a Turbo Man doll weeks ago, he would’ve done it and bought her something special, too.

Plus, when she whacks him in the head with a thermos of eggnog, he pretty much realizes he overstepped his bounds and moves on. Please show me where Howard can admit that he sucks in this entire movie.

Howard causes all this sh*t and still yells at his kid.

OMG, and nothing gets me more than when Howard’s been out all day looking for a nonexistent Turbo Man and calls home to... I guess tell Liz he screwed up? And then snaps at Jamie in a major way by telling him he’s “had it up to here with this Turbo Man” and loses his temper. Like, my man. If you would’ve LISTENED TO YOUR FAMILY, you wouldn’t be having this problem. Don’t martyr yourself, buddy. The reason you’re killing yourself in the Twin Cities is because you screwed up, and to snap at your little kid, who doesn’t even trust you anyway, is a major, major issue.

After all that, Howard doesn’t buy his own wife a gift.

And then, after all of THIS, at the very end of the movie, Liz makes a comment about how Howard went through so much to get their son the toy he wanted — only because he knew he majorly f’d up! — that she says she can’t wait to see what he got her. And the look on his face — clearly he doesn’t have a Christmas gift for his wife — is absolutely the worst. It’s not even a little bit funny. Like, go F yourself, Howard. You can stick your own Turbo Man jetpack where the sun don’t shine and blast yourself out of this family, tysm.

More Like This
The Best Valentine’s Day TV Episodes For Kids
'Women Talking' Is A Powerful New Movie Based On A Book
Marcel The Shell Is Heading To The Oscars!
Pixar’s 'Turning Red' Is Nominated For An Oscar — Here’s How To Watch It Right Now
What Parents Are Talking About — Delivered Straight To Your Inbox