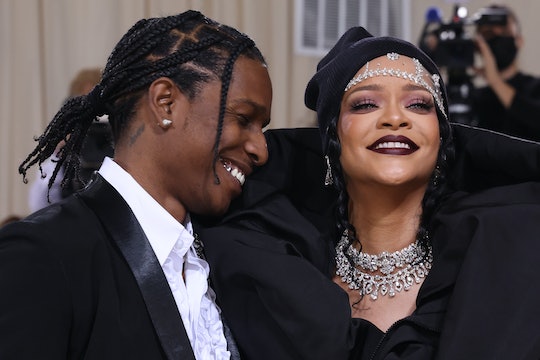 Rihanna Is Pregnant With Her First Child!

There’s no simpler way to announce it; Rihanna is pregnant! The Fenty fashion mogul, singer, and billionaire is expecting her first baby with boyfriend, rapper A$AP Rocky.

Rihanna revealed the announcement in a photo shoot rocking her baby bump in Harlem over the weekend. In the photos taken by photographer Miles Diggs, the 33-year-old wore an oversized pink coat and body jewelry over her growing bell. Diggs captioned his Instagram post “SHE IS!” The couple, however, hasn’t made any official announcement about their baby news just yet.

Rihanna and A$AP Rocky confirmed their relationship in November 2020, months after the Savage Fenty queen broke up with her billionaire boyfriend of three years, Hassan Jameel. “This romance evolved since they were friends first,” a source told People at the time. “They already knew and respected each other and it has just grown from there.”

More recently, in an interview with GQ, the “Fashion Killa” rapper called the “Diamonds” star, “The One.”

“She amounts to probably, like, a million of the other ones,” he told GQ in a May 2021 interview. “I think when you know, you know. She's the One.” Last year, there were rumors of the couple planning to get married in the future.

As for Rihanna, she has since expressed interest in starting a family. In a March 2020 cover story with British Vogue, Rihanna shared that she wanted to start a family within the next 10 years, whether she had a partner or not.

Fortunately, being alone will not be the case for her and it looks like A$AP Rocky will be with her every step of the way! Perhaps, a Fenty baby line will come out of the bundle of joys news! Here’s hoping!