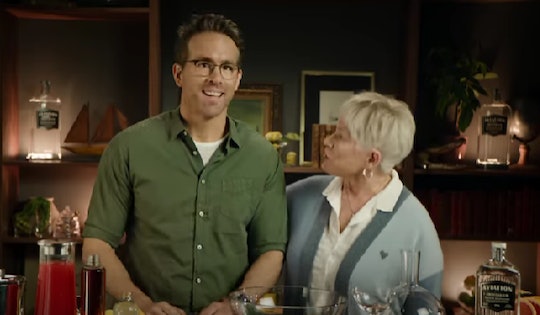 “I don’t see any coasters.”

Ryan Reynolds and his mom have decided to ring in Mother’s Day together by making cocktails. Or attempting to make cocktails while the actor tried to keep his cool as his mother fussed with him as only mothers do. They’re going to need that cocktail by the time they’re done.

In a video tutorial for his gin brand, Aviation Gin, The Adam Project actor broke down how to make a cocktail called Mother’s Ruin Punch. “It’s almost Mother’s Day,” he begins, “that time of year when we recognize our moms for all the love and support they show us. And today I’ve asked my own mom to help me raise a glass to mothers everywhere with a special cocktail called Mother’s Ruin Punch.”

His mom, Tammy Reynolds, joined him for a rare appearance, and boy can you see where he got his sense of humor. “I’m so proud of you honey,” Tammy says immediately. But her immediate goodwill changes as she notices her son isn’t stirring the cocktail counter clockwise as would be her preference, and Reynolds sort of pushes her hand away and mutters, “Thank you.”

From there Tammy fidgets with her son’s shirt, asks, “Is that how you want to do it sweetheart?” when he pours vermouth into the bowl, and tells him, “Not too much!” when he dumps a whole bunch of Aviation Gin into the cocktail.

“As this chills for an hour you’ll want to spend that time reflecting on everything your mom has done for you over the years,” Reynolds says, while Tammy points out that he doesn’t have any coasters. To be fair, I didn’t see any coasters, either.

Finally, Tammy reassures her son, “We can fix your performance in post, sweetheart,” and they both laugh. Because of course Tammy, who is grandmother to Reynolds’ 5-year-old daughter James, 4-year-old Inez, and 2-year-old Betty with wife Blake Lively, is in on the joke. As was Hugh Jackman, presumably, when he wrote on Instagram, “Happy Mother’s Day Tammy! You should get a special honor for raising that one. I’m just saying.”

This isn’t the first time Tammy has stepped in to help her son. In 2020, she trash talked Chris Hemsworth per her son’s request, even though she said in a video on her son’s Twitter feed, “I would not talk about my friends like this,” and then went on to say, “Chris Hemsworth is everyone’s least favorite Australian. And keep in mind Hugh Jackman still exists.” She went on to trash talk Hemsworth and laugh at her son’s NSFW jokes, so now we know who to blame for Reynolds’ saucy sense of humor.

He owes it all to his mom. Don’t we all?