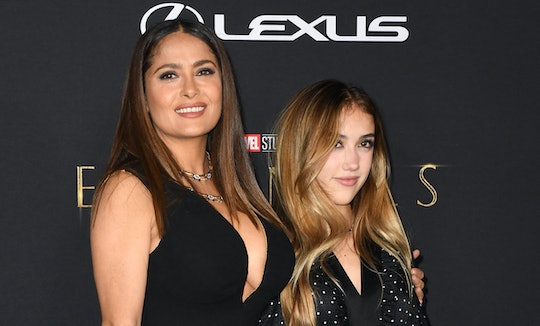 Valentina think it’s “cool” that her mom is playing a superhero!

The red carpet for the Eternals movie premiere was a mother-daughter affair and girls night out for Salma Hayek. The 55-year-old actress took her daughter, Valentina Paloma Pinault, to the world premiere of her new Marvel movie on Monday night and the pair glowed in their black ensembles. Hayek looked chic in a black Gucci dress while the 14-year-old rocked a mini black and white polka dot Saint Laurent dress with black tights and booties.

“For me, it's a shocker in many ways. Just to know that in your 50s you're going to be a hero, an action hero, in the Marvel family,” Hayek told Entertainment Tonight, referring to her role as Ajeck, the Eternals’ spiritual leader in the new Marvel film, which premieres in theaters on Nov. 5. “And then on top of it, it used to be a man that they just turned into a woman. I mean if somebody told me this five years ago, I would've laughed... so hard. And here we are! Anything is possible.”

Valentina chimed in about her thoughts on her mother playing a superhero role and she’s one proud daughter. “She’s cool, she’s cool,” Valentina told Entertainment Tonight.

Monday’s premiere was the first time in a long time the teen has made a public appearance. For her 14th birthday last month, Hayek shared a rare photo of herself with her daughter in front of a beautiful sunrise on her Instagram. “My precious girl, you are everything to me,” Hayek wrote. “Blessed be the day you came into my life to shine your radiant light Happy Birthday Valentina!!!!! Thank you for being YOU.”

Valentina is the only child of Hayek and her husband, billionaire fashion mogul and Kering chairman and CEO, François-Henri Pinault. The two married in 2009. The Desperado actress, who is also a stepmother to her husband’s three other children, gave birth to Valentina when she was 41 years old in September 2007.

“I think I’m a better mother because I had her later,” she told Town and Country magazine in 2019. “But I do get tired. I’m not going to lie.” She went on to describe her daughter as “very creative, very smart, very funny, and very willful.” And now, at just 14, she’s already a pro on the red carpet.

More Like This
Zaya Wade Is Rocking New Long Hair & As Gabrielle Union Put It, She's A "Vision"
Serena Williams Shares How Her Daughter Comforted Her After Losing A Big Match
George Clooney Really Regrets Having His Twins Learn A Language He Doesn't Speak
Khloé Kardashian Reveals Tristan Thompson Proposed To Her Last Year & Why She Said No