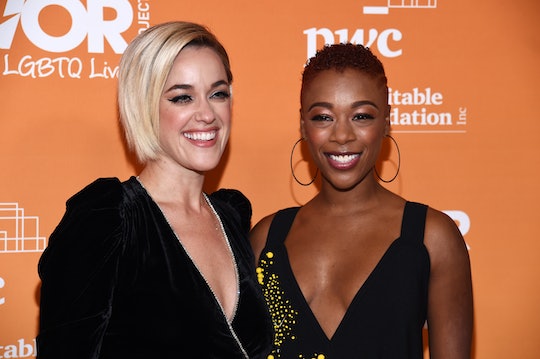 “Welcome to the world, baby girl.”

It was an extra special Mother’s Day for one Orange Is The New Black couple, actress Samira Wiley and writer Lauren Morelli. In honor of Mother’s Day, the happily married couple of three years announced they’re mothers to a sweet baby girl, who they welcomed last month.

“Happy 1st Mother’s Day to my beautiful wife, who four weeks ago today after laboring for almost 3 days gave birth to our first child — our gorgeous daughter, George,” 34-year-old Wiley wrote on Instagram, where she posted a precious newborn picture of their daughter wearing a tiny beanie with each of them holding her tiny hands. The couple’s daughter, George Elizabeth, was born on April 11. “Welcome to the world, baby girl. We love you and we thank you for giving us the best 1st Mother’s Day two ladies could ask for,” Wiley added.

On Sunday, Morelli posted the same sweet photo on her Instagram page with a sweet message as well. “4 weeks ago today, our daughter came into the world and changed everything,” 38-year-old Morelli captioned the photo. “We are so happy, so grateful, and so tired. George Elizabeth, 4.11.21.”

Wiley and Morelli met on the set of the hit Netflix show Orange Is The New Black in 2012. Two years later, Morelli publicly came out as gay in a 2014 essay published by Mic titled, While Writing for 'Orange Is the New Black,' I Realized I Am Gay, though she said she realized she was a lesbian in 2012. The couple officially tied the knot on March 25, 2017 in a pretty and fun Palm Springs ceremony. “I wanted it to be about celebration and funfetti cake,” Wiley told Brides in an October 2017 article.

Back in 2018, Wiley expressed her and Morelli’s desire to start a family of their own together. "Yeah, we think about that!" The Handmaid's Tale actress told Entertainment Tonight at the time. "We are so happy, so in love." And now that baby George is here, the new moms have new exciting milestones to think about... and a lot of sleep to catch up on!