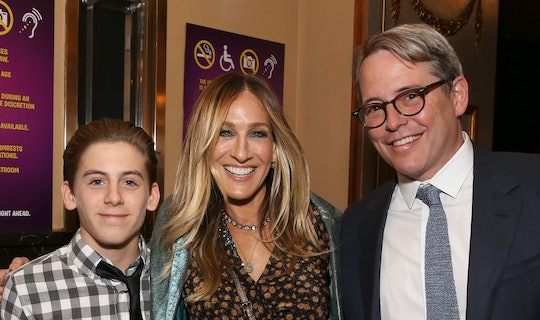 And an emotional message that will make moms of teenagers a little weepy.

Sarah Jessica Parker is intensely protective of her life with her family. As a mom of three, she has managed to keep photos of her children private over the past two decades. But that doesn’t mean she can’t share a special photo or two herself, particularly on a big day. And particularly when that photo accompanies a truly meaningful message to the child in question. In honor of his 19th birthday, the Sex and the City actress shared a message to her son James that was full of that special blend of love, pride, and melancholy moms of teenagers will recognize all too well.

Parker is mom to James Wilkie and his 11-year-old twin sisters, Marion and Tabitha, with her husband of 24 years, Matthew Broderick. The family has been living in New York City (I mean, where else) for the past two decades, although it seems their oldest child might be living away from home these days as a freshman at college. And his mom is really feeling all the feelings on his birthday.

“He is 19. Today. He doesn't wake with us,” Parker wrote on Instagram on Thursday. “He is in his life. Away. In his studies. Among new friends. Sending home details. There is so much to tell.”

Sarah Jessica Parker got emotional for her son’s birthday.

The proud mom is going through a transitional phase with her son all parents go through at some point. That letting go. And she’s clearly feeling philosophical about it on James’s birthday.

“New adults making lasting impressions. Opening his still young eyes. New thoughts. New books. New and different mornings,” she continued. “On this one, it's bittersweet. Not to be with him. To wish him the most happiest of birthdays. Our Scorpio. Our Oct baby. Our JW. Happy Birthday. Balloons. Candles. Hoping every birthday wish to come true. Xxx,Mama.”

Other parents took to Parker’s post to relate. Debra Messing wrote, “Happy Birthday Mama! Thinking of you today. (I'll be you next year!),” while another remembered when Parker was pregnant for James during filming of SATC, “Was this the one you were pregnant with while filming SATC, specifically when you were on the train ride to CA to meet big?”

Not only was Parker pregnant for James during filming, he actually made an appearance on the show as Aiden’s son Tate during the sixth season opener. Now we can all feel a bit melancholic about Sarah Jessica Parker’s son turning 19 years old along with her.