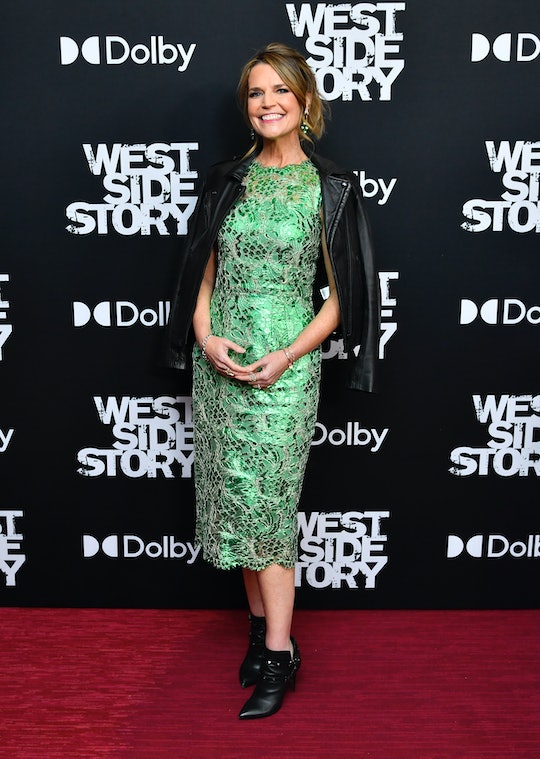 Savannah Guthrie Opens Up About Being An "Older" Parent

Her road to motherhood wasn’t an easy one.

When we see celebrities at the top of their career, it can be easy to assume that they have everything they want. But as Savannah Guthrie recently told Good Housekeeping, all she ever really wanted was a family — and it wasn’t easy to come by. At 41, Guthrie still wasn’t sure if she’d ever be able to conceive; after having her first child, she went through two rounds of IVF and suffered a miscarriage before having her second kid. Now that she and her husband Michael Feldman have two children, daughter Vale, 7, and son Charley, 5, Guthrie is facing a different set of challenges, from being an older parent to mommy guilt and more.

Guthrie, 50, and Hoda Kotb, 57, costars of NBC’s Today show, recently opened up to GH about their journeys to motherhood. (Kotb was left unable to bear children after having breast cancer; she and her ex-fiance Joel Schiffman then adopted Haley, now 5, and Hope, now 3.) Guthrie admitted that she “stopped even letting myself hope or believe I could [get pregnant], because the years were getting on.”

“It wasn’t that I thought it was impossible,” she added, “I just thought it wasn’t likely. I didn’t want to get my hopes up. I just tried to tell myself that it would be OK if it didn’t happen: Maybe it’s not meant for me, and that’s OK because I’ve already been blessed so much in my life. I’m not entitled to have a baby too. Looking back, that mindset was probably a self-defense mechanism.”

Now that she has her family at last, Guthrie seems to be at a comfortable place.

“Hoda and I are both at a point in our careers where we have a lot more certainty about our schedules — that helps,” she said. “By this time in life you’ve seen a few things and you know how to weather the ups and downs. I’m glad my kids don’t have the stressed, anxious and insecure 30-year-old version of me. The peace and calmness that comes with age is a great thing for kids to see in action.”

And though it might be tempting to think that the exhaustion of parenthood is magnified by age as well, Guthrie knows younger parents are in the same boat.

“We live in New York City, and there are a lot of older parents, so you don’t stick out like a sore thumb,” she said. “But sometimes I wonder, on a Saturday afternoon when I’m really tired, Do younger parents feel this way? And the answer is yes. I know them, they’re my friends — and they’re exhausted. All parents have those moments of low energy and times they’re frustrated. That’s just the nature of it.”

One issue Guthrie hasn’t quite learned how to deal with yet (if any mother ever does) is mom guilt.

“The first time I put [Vale] in her nursery, I lay down on the bed and started sobbing,” she said. “Mike said, ‘What’s wrong?’ And I said, ‘This is the farthest apart we’ve ever been.’ She’d either been in my belly or in my arms or in my room, and I just felt sick. I almost felt physically ill to be apart from her — and it still happens. I’m feeling guilty right now. I’m probably late to [pick her up from] the bus. I don’t know how to overcome it. I just know that it’s real. I wish it weren’t, but it really is. I mean, I feel guilty all the time, and all I do is hang out with my kids.”

As for the notion of “balance,” Guthrie isn’t buying it.

“I don’t know what balance is. Sometimes you’re out of whack — and sometimes you have a good day. I don’t even think in those terms. My family is my priority — it’s not even a close call — but I have a job that I just love. And so I try to do both to the best of my ability.”

More Like This
When Christina Aguilera’s Kids Give Her A Bouncy House On Mother’s Day, She Jumps Right In
Mindy Kaling’s Daughter Is A Total “Narc” With Her Little Brother
Model Hunter McGrady On Being 6 Months Postpartum In Latest SI Swimsuit Edition
Katrina Scott On Being First Pregnant Model In Sports Illustrated’s Swimsuit Issue