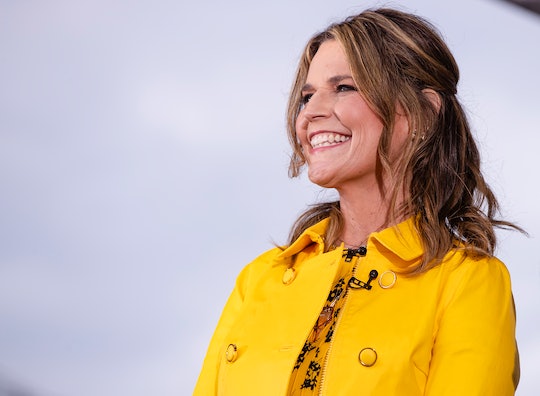 Like Most Moms, Savannah Guthrie's Kids Decided Her Top Spotify Song Of The Year

Who doesn't want to listen to the PAW Patrol theme song all year?

It's that time of year again, when Spotify rounds up all of our listening habits from the past year and rank the ones we listened to most. For some, this list make a lot of sense; podcasts for long walks outdoors, new music from favorite artists, music for cooking, for dancing, for relaxing. Then there are moms like TODAY's Savannah Guthrie, whose Spotify Wrapped 2020 top song was presumably not her own top choice. Much like other parents on Twitter who noticed their top songs were not actual personal favorites, this is what being a parent is all about. Sacrificing your playlist in favor of the entire Frozen 2 soundtrack on repeat.

On Wednesday, the anchors of the TODAY Show revealed their own Spotify Wrapped 2020 Top songs on air, and it was truly a revelation. Hoda Kotb, for instance, got really into Alicia Keys' "Underdog," while Al Roker loved "Philadelphia Freedom" by Elton John. Guthrie, who is mom to 6-year-old daughter Vale and 4-year-old son Charley, admitted sheepishly, "Well, I'm not proud but it is PAW Patrol." The PAW Patrol theme song, to be precise. But it didn't stop there, "And by the way," Guthrie told her laughing co-hosts, "the number two song was also PAW Patrol... ' Pop Pop Boogie.'"

Don't feel too sorry for Guthrie, though. She was pretty sure her third choice was a song she might have actually chosen herself.

Guthrie was not the only parent looking at their top song on Spotify Wrapped and realizing that even their playlists have been infiltrated by their children. As one mom wrote on Twitter, "The rest of my top of the year: frozen, frozen 2, tangled, beauty and the beast, Lizzo, Dolly Parton and Hamilton." Another mom also saw her playlist taken over by the soothing sounds of PAW Patrol, "I wanna post my Spotify wrapped but also I don’t because it definitely doesn’t accurately represent my music taste. I play music for kids like 6 hours every day at work. Just because I’ve listened to the Paw Patrol theme song 100 times doesn’t mean it’s really my favorite..."

Parents, take heart — kids will get older and their music tastes will evolve. Eventually, you might even find a song or two you can both agree on and share a favorite like "Baby Shark" or something. Won't that be nice?

More Like This
It’s Britney(‘s Birthday), Bitch!
Khloé Kardashian Shares Relatable "Mom Life" Selfie After Her Baby Boy Spit Up On Her
“Dominick The Donkey” Is The Annoying Christmas Tradition I Can't Live Without
20 Of The Best Christmas Movies For Kids