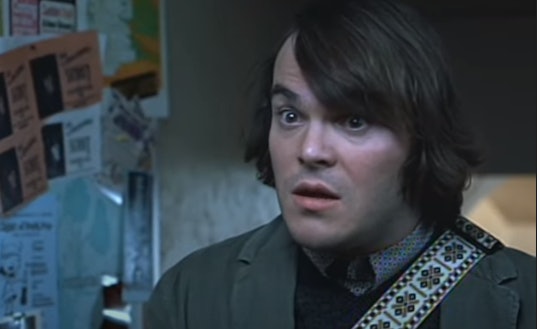 It’s not always the big messages that get through to kids. Not those after school special types of moments all calculated to make a point, whatever that point might be. Sometimes it’s a small moment in a movie that gets through to them. Like a scene that has cropped back up from 2003’s School Of Rock between Jack Black and a young girl who feels bad about her body. In less than one minute, his character managed to explain why it’s OK to be whatever size you are, it’s OK to love food, and it’s OK to be confident about it all.

Hamish Steele recently shared a clip of this powerful and body positive scene on Twitter, which has been viewed more than 8.5 million times. “This scene is more revolutionary than I think they even knew and it really stuck with me as a child. Especially the last line,” Steele wrote on Twitter.

The scene from School Of Rock plays out like this: talented young singer Tomika, played by actress Maryam Hassan, is getting ready to sing on stage with her fellow classmates for Battle of the Bands. She gets stage fright and tells Black’s character she’s worried to go out on stage “because I’m fat.” Black, playing musician and substitute teacher impersonator Dewey Finn, reminds her that he himself is considered “sexy and chubby.” And when she asks him why he doesn’t go on a diet, he answers, “I like to eat, is that such a crime?”

Jack Black’s scene in ‘School Of Rock’ is going viral.

Black’s response to young Tomika’s insecurity has resonated with so many people on social media since the scene resurfaced ahead of School Of Rock’s release on Netflix on May 1. One Twitter user lauded the scene as a wonderful way to build body confidence. “*this* is how you boost someone's confidence about their size. let them know that being fat changes nothing, and isn't a crime,” one person tweeted. “the only thing that makes being fat unacceptable to society is because people say it is. there is zero reasoning or logic.”

Fans are rediscovering ‘School Of Rock’ through a powerful body positive scene.

Another social media user remembered how the scene affected them as a child. “I was barely 9 when this movie came out. It was also around the time I started to struggle with my weight,” they tweeted. “I remember feeling so much better about myself after watching this part.”

Jack Black’s ‘School Of Rock’ is going viral for all the right reasons.

Jack Black’s facial reaction to Tomika’s lack of confidence also had people applauding him, “Honestly, this is THE BEST reaction to her saying that,” one person tweeted. “It is such a genuine look of ‘Girl, what are you EVEN on about what does that have to do with ANYTHING??’ which reinforces that he had never even considered that to be an issue.”

Another noted that the entire movie was really about incredible life lessons.

Jack Black is being praised for ‘School Of Rock’ and it’s about time.

As for Black, he knows he made something special with School Of Rock. In a clip from a 2019 interview with GQ shared on Twitter, he said it was the movie he was “most proud of,” and that “was the only time I felt like I was meant to do something.”

Jack Black is very proud of ‘School Of Rock.’

And he pulled it off beautifully.