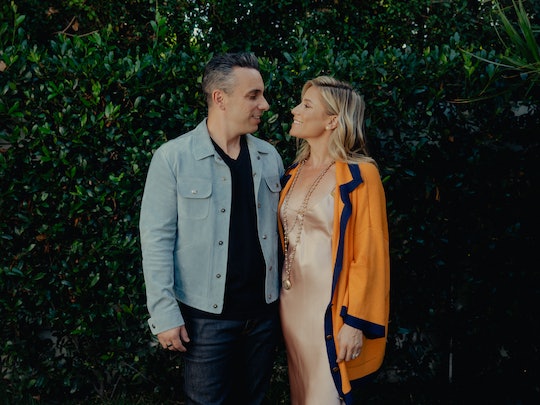 The comedian can’t wait to share his new material.

He’s perhaps one of the most popular touring comics on the road right now, thanks in no small part to his family. Throughout his career, Sebastian Maniscalco’s wife and two kids have become some of his best fodder for his stand-up routine.

The Stay Hungry comic has managed to parlay his popularity as a stand-up performer onto the screen, with roles in Green Book, The Irishman, and an upcoming untitled dramedy directed by Ray Romano. The Chicago-born comedian’s particular blend of every man observations, physical style, and honest admissions about his own failings had Jerry Seinfeld himself referring to him as “my favorite comedian,” as Maniscalco’s bio on his website notes.

Maniscalco told Billboard that he’s excited to get back on tour in 2021 with his new show Nobody Does This after a year spent at home during the pandemic. “I’ve been unable to share my comedy for over a year,” he explained. “I’m busting at the seams to get back out on the road and share my observations about life and family on this brand-new tour!” After a year with his wife and kids, he probably has a wealth of new material. Here’s what you need to know about them.

He’s Been Married To His Wife Lana Gomez Since 2013

Maniscalco married artist Lana Gomez in 2013. Gomez studied art at the University of Tennessee before heading to Los Angeles, and her abstract paintings have been featured in The New Yorker and InStyle. She met her future husband at the gym after the comedian asked their mutual trainer to set him up with any potential girls. “I saw her and we started talking,” Maniscalco told The Fighter And The Kid in 2015. “She was on the treadmill and I came up next to her and said, ‘You wanna go out with this?’” She agreed, and the two ended up hitting it off based on their mutual sharp senses of humor.

The comedian talked about his wife’s very different upbringing in his stand-up in his 2015 Netflix special Stay Hungry; she is Jewish and his first introduction to Passover was a revelation. “7:30, we sit down and I’m starving. They start passing out pamphlets, like reading material,” he explained. “I’m like, ‘What’s going on?’ She’s like, ‘Oh, we read for two hours.’ 'Two hours?' I said, ‘Listen, I’m Italian. As soon as I sit at a table, I have to have bread within 15 seconds of sitting down at the table.’”

Their Daughter Seraphina Was Born In 2017

Sebastian Maniscalco is a dad to daughter Seraphina.

Maniscalco and Gomez welcomed their first child, daughter Seraphina Simone, in 2017. At the time the comedian shared the news on Instagram with a montage of photos of the newborn and an explanation of her name: “We are so excited to introduce the newest member of our family- Serafina Simone Maniscalco! Serafina was my grandmother's name, Simone is Lana’s mom, and Serafina Simone is our baby girl!”

Sebastian Maniscalco’s daughter is too funny.

Not only has Seraphina joined her dad on stage in the past, as she did in Canada as a baby, she is also funny in her own right. Maniscalco recently shared a video on Instagram where Seraphina was pretending to be a hairdresser and the two of them got right into it. When he asked her what she does for happiness, Seraphina said, “I just take naps,” but apparently she wasn’t OK with him doing the same. He suggested he should take some time off and she categorically told him, “No.” That salon isn’t going to buy itself.

In June 2019, Seraphina became big sister to little brother Caruso Jack. Much like his big sister, Caruso Jack’s name carried a special meaning for his parents. “We’d been thinking about the name Caruso for a while,” he told People at the time. “Lana and I stayed at Hotel Caruso on the Amalfi coast on our honeymoon and loved it. When we learned it actually means ‘boy’ in Sicilian, it sealed the deal!” As for his middle name Jack, that was given in honor of Gomez’s own late father, Barry Jack Gomez.

Caruso Is A Tiny Comic Too

Sebastian Maniscalco has an adorable son.

In May, little Caruso made an appearance on his dad’s Instagram feed where he was giving him a questionable physical with his toy doctor kit. “You don’t have much of a bedside manner,” Maniscalco noted. Not that Caruso seemed too bothered. This whole family seems pretty comfortable with doing their own bits.