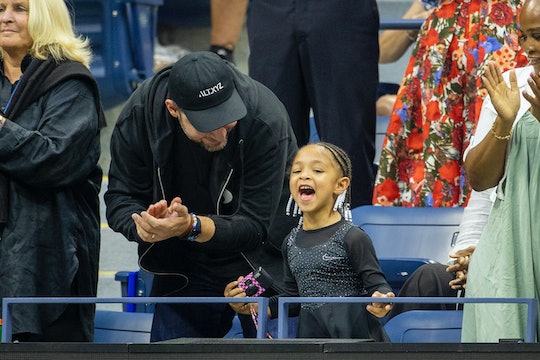 The GOAT herself went from beads to diamonds.

Serena Williams won round one of the Women’s Singles at the US Open Tennis Championships in New York City yesterday against Danka Kovinic of Montenegro, and her daughter Olympia, who turns 5 on Sept. 1, cheered from the stands with her dad, Alexis Ohanian. The 23-time Grand Slam champion has said that this will be her last professional competition, and she and her daughter both wore their hair in a symbolic way to honor Williams’ iconic tennis career.

Olympia’s genuine excitement watching her mom from the stands at the Arthur Ashe Stadium was adorable, but it was Olympia’s hairstyle that drew the most attention. She honored her mama with white beads in her braids, just like Williams wore at her first US Open in 1998, when she was just 16 years old. Williams and her sister, Venus Williams, wore matching white beads in their hair as they competed. This look was more than just looking pretty — it was a way to tell the world that Black women (and their hair) have every right to be a part of the predominately white sport.

For her part, Williams has upgraded from her original beads — and wore diamonds in her hair for her farewell match. Her curls were sprinkled with diamonds that glittered as she moved along the court, in a look fit for the queen she is. What an awesome tribute to the tennis player known as the greatest of all time.

The iconic tennis player announced her retirement in an essay for the September 2022 issue of Vogue.

“I know it’s not the usual thing to say, but I feel a great deal of pain,” Williams wrote. “It’s the hardest thing that I could ever imagine. I hate it. I hate that I have to be at this crossroads. I keep saying to myself, I wish it could be easy for me, but it’s not. I’m torn: I don’t want it to be over, but at the same time I’m ready for what’s next.”

The tennis legend appeared on Meghan Markle’s new podcast Archetypes on Aug. 23, where she shared she would do anything for her daughter. “I would drop anything at any time to whatever I had to do for Olympia,” Williams said. “Middle of a Grand Slam final. I would leave if I had to.”

“That kind of makes me sad,” Williams continued. “And brings anxiety to my heart. It’s hard to completely commit when your flesh and blood is saying, Aw.”

Williams will play in the second round of the championship tomorrow. You can see the full schedule here.