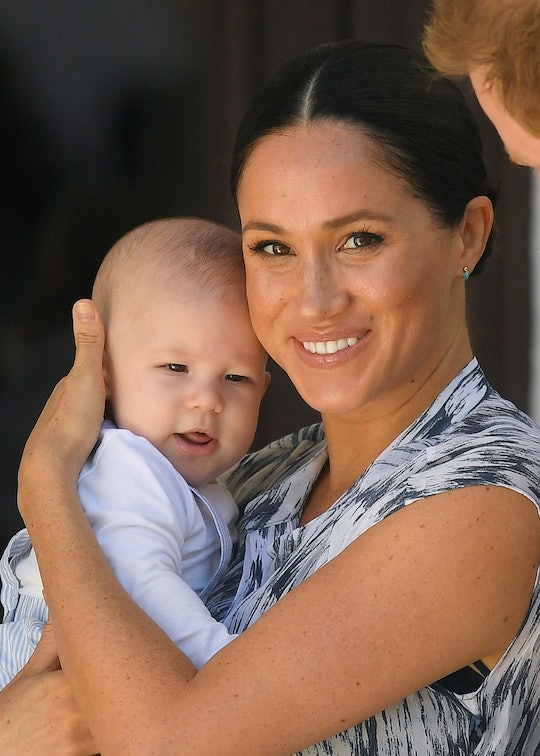 “He was supposed to be sleeping in there.”

When Prince Harry and Meghan Markle decided to give up their royal titles in January 2020 in part to seek shelter from the Royal family’s bruiing relationship to the press, it was completely understandable. After all, the former Suits star faced her share of media scrutiny and negative press, leading her to pursue legal action against a tabloid in 2019. But now, Markle has revealed another reason she needed a break from her Royal obligations. In the premiere episode of Markle’s new podcast, Archetypes, she shared a scary story about Archie’s nursery catching fire when he was a baby during their southern Africa tour.

The first Archetypes episode, hosted by Markle herself, dropped on Spotify today. At one point in the hour-long episode, “The Misconception of Ambition with Serena Williams,” the Duchess of Sussex, who is mom to Archie, now 3, and Lillibet, 1, with Prince Harry, talked with Williams about the double standard ambitious women face. The two shared how they would do anything for their kids.

“I would drop anything at any time to whatever I had to do for Olympia,” Williams said, referring to her 4-year-old daughter whom she shares with husband Alexis Ohanian. “Middle of a Grand Slam final. I would leave if I had to,” the tennis star, who recently announced her retirement, continued.

Markle clearly empathized with the feeling of being split between your desire to protect and care for your child and a demanding public life. “And yet you still show up and do the match,” Markle responded. “You still get the thing without people having any sense of what was happening behind the scenes.”

Markle shared that when she was touring southern Africa with Prince Harry and Archie, who was only about 4-and-a-half-months-old, in 2019, his nursery caught fire when she was away from him.

“The moment we landed, we had to drop him off at this housing unit that they had had us staying in,” Markle explained. “He was going to get ready to go down for his nap. We immediately went to an official engagement in this township called Nyanga, and there was this moment where I'm standing on a tree stump and I'm giving this speech to women and girls, and we finish the engagement, we get in the car and they say there's been a fire at the residence. What? There's been a fire in the baby's room. What?”

That is absolutely terrifying! Williams was shocked, and Markle says, “Oh my god, I can't believe we haven't talked about this.” Then she shared that their “amazing nanny” named Lauren was “in a flood of tears.”

“She was supposed to put Archie down for his nap and she just said, You know what? Let me just go get a snack downstairs,” Markle continued, sharing the miraculous reason Archie wasn’t in his nursery at the time of the fire. “And she was from Zimbabwe, and we loved that she would always tie him on her, her back with a mud cloth, and her instinct was like, ‘Let me just bring him with me before I put him down.’ In that amount of time that she went downstairs. The heater in the nursery caught on fire. There was no smoke detector. Someone happened to just smell smoke down the hallway went in, fire extinguished. He was supposed to be sleeping in there.”

Luckily, everyone was fine, but Markle and Prince Harry were understandably “shaken.”

“And of course, as a mother, you go, ‘Oh, my God, what?’ Everyone's in tears, everyone's shaken. And what do we have to do? Go out and do another official engagement? I said, ‘This doesn't make any sense,’” Markle added.

Every mother’s instinct would be to stay home with their baby in that moment, but as royals, Markle and Prince Harry had to put their duty first due to the “optics of the situation.”

“The focus ends up being on how it looks instead of how it feels,” she continued. “And part of the humanizing and the breaking through of these labels and these archetypes and these boxes that we’re put into is having some understanding on the human moments behind the scenes that people might not have any awareness of and to give each other a break. Because we did — we had to leave our baby.”

The story illustrates some of the broader points both Harry and Meghan have made in the past about life within the Royal Family, that it emphasizes service over connection and that the feelings of individual members of the “firm” are less important than the overall public impression of the monarchy. As they told Oprah in their blockbuster interview, when Harry and Meghan felt they were genuinely struggling, the family members and palace staff seemed most focused on how their roles and choices as a couple were perceived, rather than how it felt to them.

Despite how scary the experience was for the Duke and Duchess of Sussex, baby Archie didn’t seem to be affected by the near-miss at all. In their ITV documentary Harry & Meghan: An African Journey, Markle said Archie was so “happy.”

"We thought he was happy before! He is the happiest here, just so chatty the past two days,” she said. What a relief!