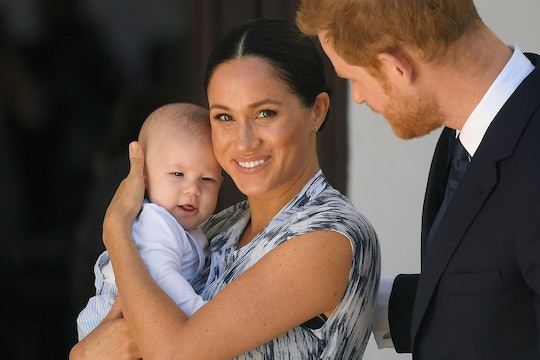 Prince Harry and Meghan Markle landed back on British soil on Thursday, putting an end to their spectacular 10-day tour of southern Africa. And I do mean spectacular. If you follow the royal couple, you probably noticed that they appeared to really find their stride while on tour together. Not just as a couple but as a family, with nearly 5-month-old baby boy Archie making his first appearance since he was born. There were so many lovely moments on the tour that it feels a bit sad to see it end. But don't worry everyone, a documentary about Prince Harry and Meghan Markle's royal Africa trip is in the works, and this means even more behind-the-scenes looks at the happy family. And, hopefully, starring that little charmer Archie in every frame.

The Duke and Duchess of Sussex do lead lives that sort of lend themselves to documentary filmmaking, and this latest trip to southern Africa is no exception. Whether the couple were bringing their sweet, smiling baby boy Archie to meet the Archbishop Desmond Tutu for tea, enjoying a joyful dance with a group of women in Cape Town, or delivering powerful speeches on the importance of supporting education for women, they seemed to really hit their stride. To throw off the imposing shackles of the British monarchy back home and, even more importantly, the unrelenting criticism from the British tabloids (more on that later). In other words, they really seemed to come into their own.

And it looks like they're going to give royal fans a backstage pass to their time in Africa. Tom Bradby, a journalist with ITV News, tweeted on Thursday that he had "just finished filming a documentary on Harry and Meghan in Africa. I think it will explain a lot when it airs."

Yes I just got shivers, too.

Bradby didn't share any further details, but it's important to note that he is no stranger to making documentaries about the royal family. He worked with Prince Harry on a documentary during a 2016 visit to Africa and also interviewed Prince William and Kate Middleton in 2010 after the future king popped the question in Kenya.

Clearly the family is totally in love with Africa. After all, Prince Harry also realized Markle was the one for him when the couple visited Botswana after a few weeks of dating, according to The Daily Express. We all know how that turned out: a gorgeous royal wedding in May 2018 and a gorgeous royal baby in May 2019.

And, of course, there's the connection to Prince William and Prince Harry's mother Princess Diana. After her death in 1997 when the two men were only 12 and 15, their father Prince Charles took them to Africa to get away from the media attention and try to heal, according to The Evening Standard.

During a beautiful speech on the couple's last day of their official royal tour of Africa, Prince Harry tried to put into words his deep love for the continent. He said, according to The Daily Mirror: "Ever since I came to this continent as a young boy, trying to cope with something I can never possibly describe, Africa has held me in an embrace that I will never forget, and I feel incredibly fortunate for that. And every time I come here; I know that I’m not alone."

I have a feeling, based on this speech alone, that this documentary is going to get really emotional. And if it includes just a whole bunch of footage of baby Archie, it's going to be the only thing I want to watch ever.