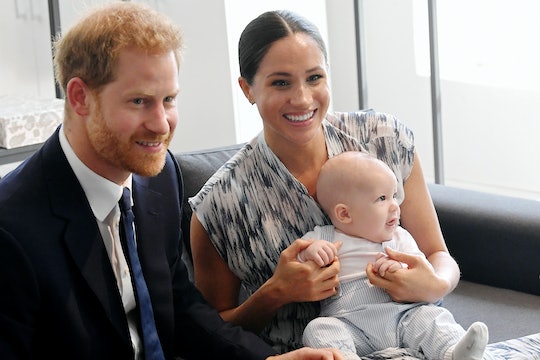 Baby Archie Is In Love With Africa, Just Like His Parents

Prince Harry and Meghan Markle's royal tour of Africa has been over for a few weeks but it already seems like they're ready to pack their bags and go back. The royal couple obviously loved their time together traveling through South Africa and Botswana, and it sounds like they've passed their special feeling for the area on to their little boy. And in a recent documentary for ITV, Meghan Markle said that baby Archie loves Africa, while also revealing the cute reason why she knows.

The youngest member of the royal family made his big debut during a visit to Archbishop Desmond Tutu in Cape Town, South Africa at the beginning of October. Well, his biggest appearance since his first one just a few days after he was born on May 6, that is. But back then, he was only a few days old and covered up by blankets, meaning he was a little difficult to see.

This time around, however, Archie charmed the world by being this sweet, smiley, and gregarious little baby sitting in his mother's lap as the Duke and Duchess of Sussex visited Archbishop Tutu. And Markle explained how her little boy seemed more upbeat than usual while away on tour. As she explained in the ITV documentary Harry & Meghan: An African Journey, he appeared to be the "happiest" he has ever been, noting, "We thought he was happy before! He is the happiest here, just so chatty the past two days." Aww!

Prince Harry also pointed out in the documentary that his son "clearly loves" being in Africa, sharing, "I tell you what, [Archie] clearly loves Africa as well, because he was up looking out the window, he's found his voice now. He was bouncing up and down, he's making more noise than he's ever made, and he's smiling all the time."

This is good news for Prince Harry and Meghan Markle, considering the strong affinity both of them have for Africa. Even before their recent 10-day tour of the southern part of the continent, Africa has held a special meaning for them. Prince Harry spent a lot of time in Africa after his mother, Princess Diana, died in 1997 when he was just 12 years old, crediting the people there for helping him heal from that particular wound. And of course, he took Meghan Markle to Botswana in 2016, with the new lovebirds camping out under the stars.

No wonder they want to share this special place with Archie, right?

Although the whole family obviously loves being in Africa, it seems they don't have any plans to move there permanently. Prince Harry noted in the ITV documentary that it doesn't seem like a possibility for them at the moment, as per Town and Country: "We've just come from Cape Town. It would be an amazing place for us to be able to base ourselves, of course it would. But with all the problems that are going on there, I just don't see how we'd be able to make as much difference as we want to, without the issues and the judgement of how we would be with those surroundings."

He added, "I think It's a very hard place to live when you know what is going on and then you're, again, slightly disconnected from it."

Whatever happens in the future, I think it's probably safe to say the Sussex family will always stay connected to Africa. How could they not when it brings them so much joy?