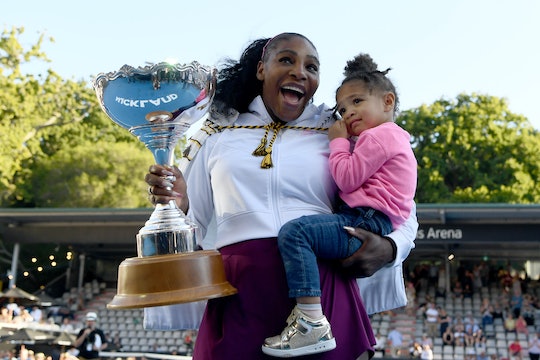 Turns out, Justin Bieber has the perfect words to describe motherhood.

Tennis is exhausting, but nothing compares to the trials of motherhood. Just ask Serena Williams, Olympic champion and mom of 4-year-old Alexis Olympia Ohanian Jr. with Alexis Ohanian. She made a TikTok yesterday with her adorably sassy mini-me, and it’s so dang relatable.

The TikTok was made in Williams’ bathroom, where she and Olympia were hanging out, wearing sweatsuits and socks. The video is a series of pictures set to special effects of the two ladies, where the fashion designer is making a stoic face and Olympia is being silly for the camera. But the kicker? It’s made to Justin Bieber’s new song, “I Feel Funny” — and who knew it captured mom life so perfectly?

“I don’t got energy,” Bieber rapped in the song. And, same. The short clip also featured the verses: “Please just hype me. Bills on bills. I want to make them. All these hearts. I used to break them.”

Williams captured the video: “All these 💗🧡💔 #fyp #momlife.” Bieber probably isn’t talking about the struggles of being a parent in his new song — especially since he and wife Hailey Bieber don’t have any kids yet — but it’s uncanny how much these lyrics work. Extra bills? Not breaking hearts anymore? Yeah, the tennis star absolutely nailed the connection!

Williams often posts cute videos with Olympia. On May 5, she posted to Instagram with her “forever bestie” Olympia, while they danced in matching dresses. She also frequently talks about about challenges she faces as a mom. In a cover story with Insider published April 2022, Williams opened up about “mom guilt.”

“Mom guilt is real,” she said. “I always feel so guilty when I'm doing something on my own. I don't know if I'm a good mom, and I don't know if my method works, but I'm very hands-on with my daughter, and it was the same with our parents. So I've set really good boundaries, but then after work, I'm going right to my daughter. And that's amazing and good, but now it's like, ‘Okay, what happens to Serena?'”

But some of the issues Williams faces are on the more light-hearted side. Like on May 1, when she tweeted about another relatable moment: using the bathroom with kids around. “When you are a mom I’m convinced you gotta learn how to poop faster,” she wrote. “Or else your name is being yelled over and over again… 30 seconds or less. Thoughts?”

Moms quickly responded with similar stories. “My kids are all in their teens and this is still true,” one person commented. “I'm convinced that they wait for my butt to hit the seat just to decide they need me for something.”

Whether you’re struggling to get some privacy, dealing with mom guilt, or simply wishing you were as cool as you used to be, one thing’s for sure: you’ll never be able to listen to “I Feel Funny” without thinking of your kids again.

More Like This
Ginger Zee Had A Perfect Response After A Troll Asked Her "Who's Raising Your Kids?"
Janet Jackson's Son Eissa Is A Little Musical Prodigy In The Making
Jenny Slate Played Our Parenting Edition Of Never Have I Ever & Here’s What We Learned
Kim Kardashian Had To Pause A TV Interview To Shush Her Noisy Sons In The Audience