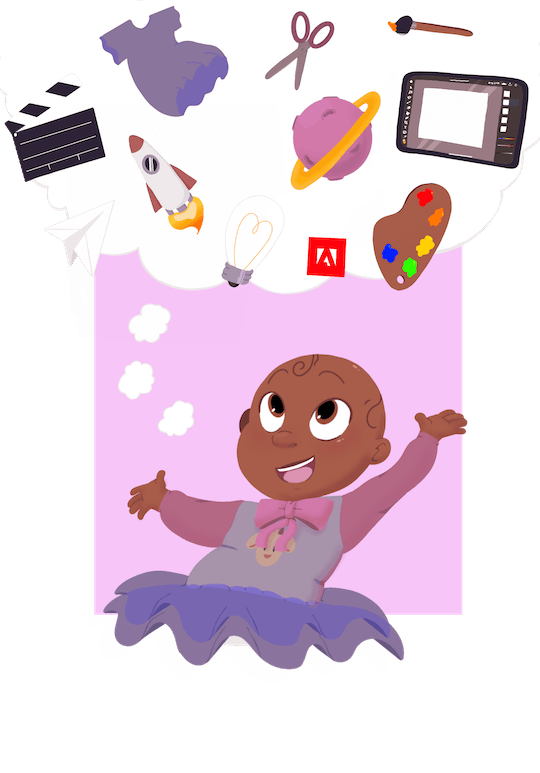 “As a father, I believe it’s important that we encourage our kids to try new things and find role models they can identify with,” the Seven Seven Six founder said in a statement. “That’s why this International Daughter’s Day I couldn’t think of a better partner than Qai Qai, to help inspire young girls, like my daughter, to pursue their dreams.”

Qai Qai first made her debut as a animated character created by Williams. And since then, Ohanian said she’s made “quite a career for herself” with over 3.2 million followers, including celebrities like Jennifer Aniston, on social media.

Illustrator Winsome Reid said she was inspired by the representation Qai Qai creates. “Silly and serious. Smart and ditsy. Cool and nerdy. Tomboyish and girly and all that exists in between. We deserve action, adventure, romance and fun! That's what I want to do with my art,” Reid said. “To let Black characters, especially Black girls, take the lead and show the spectrum of personalities, talents and interests we can have as well as the diverse range of stories we can be in.”

The Adobe x Qai Qai coloring book can be downloaded for free on Adobe. You can also access it through Creative Cloud apps like Fresco, Photoshop, and Illustrator. Once you download the pages, kids can color Qai Qai in several fun settings like the store, at a rollercoaster giving a thumbs up to a puppy rider, in space, or on the computer.

The pro-tennis legend created the Qai Qai doll in 2018 for her daughter. And with her growing social media following, Qai Qai has since become a symbol and advocate for social justice, race, and girl empowerment. For example, in June 2020 Qai Qai’s Instagram page directed her many followers to a variety of resources to support #BlackLivesMatter.

And Olmypia is, of course, a big fan of Qai Qai. “There's something really special about the relationship between a child and their favorite toy. Qai Qai has been around for more than half of Olympia's life and she still takes her everywhere we go,” Williams said in a press release last year when announcing that the doll can be purchased on Amazon for $29.99.

As for the coloring book, Reid said she’s thrilled about all of the opportunities for representation and imagination for kids. “I'm so glad characters like Qai Qai exist to be an inspiration to a generation of kids who get to see themselves front and center and not on the sidelines,” Reid said. “And I love that this book will let kids imagine themselves in a variety of roles we are rarely shown we can fill.”