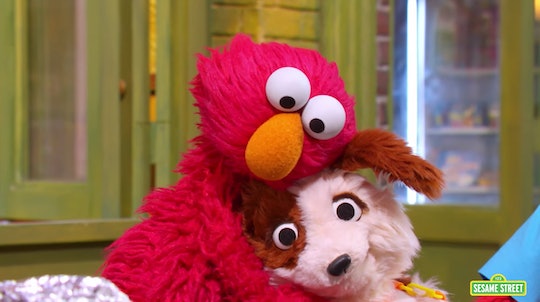 Sesame Street fans have known for a few months that Elmo’s new puppy Tango — who was introduced for the first time in August in the animated special Furry Friends Forever: Elmo Gets a Puppy — would become a regular animated and live-action resident of Sesame Street in the show’s 52nd Season. Sesame Workshop, the educational nonprofit behind Sesame Street, has said it plans to use the pup to introduce new lessons about responsibility, caregiving, and interacting with animals to viewers.

“Elmo and Tango’s growing bond helps model for young viewers how to care for a furry friend,” Dr. Rosemarie Truglio, Sesame Workshop’s senior vice president of curriculum and content, tells Romper. “Their relationship shows preschoolers how to meet a new animal, gently play with and brush a pet, teach new tricks, and most especially, show love and affection.”

According to Truglio, Elmo and Tango are also expected to engage in playful problem solving together by following clues to solve mysteries in a new animated show segment called “Elmo & Tango Mysterious Mysteries!” But this won’t be the only time viewers get to see Tango, as evidenced by an exclusive sneak peek Sesame Workshop shared with Romper from Sesame Street’s upcoming premiere episode.

In it, Tango meets Norbert the Robot, who expresses quite a bit of interest in the puppy. Seeing how much Norbert the Robot liked Tango, Elmo, Tamir, and Alan decide to build a robot dog for him to have. The three run into a problem, however, when the robot dog’s tail isn’t upright and “waggedy” like Tango’s tail is. Can they use Sesame Street’s key phrase “I Wonder... What if... Let’s try!” to uncover a solution to their problem?

Problem solving is a common theme in Sesame Street curriculum and according to Truglio, it’s not by accident. “After conducting extensive research, we identified that today’s preschoolers struggle to maintain curiosity, creativity, and perseverance in the face of challenges,” Truglio says. “To help them navigate obstacles at school and beyond, particularly through the ongoing Covid-19 pandemic, playful problem solving continues to be the curriculum focus for Season 52.”

Curriculum-driven stories designed specifically to build on children’s sense of wonder and encourage both flexible thinking skills and trial and error learning will see Sesame Street characters and guest stars in the upcoming season approach challenges from a positive place, often using the show’s key phrase of “I Wonder…What if…Let’s Try!” to guide them. Much of this season’s curriculum was designed with a focus on critical thinking skills in an effort to better equip children to handle the challenges that may come up in school and beyond, including those brought on by the pandemic.

Sesame Street’s 52nd season will premiere Thursday, Nov. 11 on Cartoonito on HBO Max. Episodes from the new season will then air every Thursday on PBS Kids starting in the fall of 2022.

More Like This
Exclusive Eureka! Clip Introduces Star Of Disney’s New STEAM Preschool Series
'Caillou' Is Officially Getting A CGI Reboot Whether People Like It Or Not
Exclusive: 'Bluey' Celebrates Father's Day With A Look At Bandit's Best Moments
Take A Sneak Peek At Brand New Daniel Tiger's Neighborhood Movie