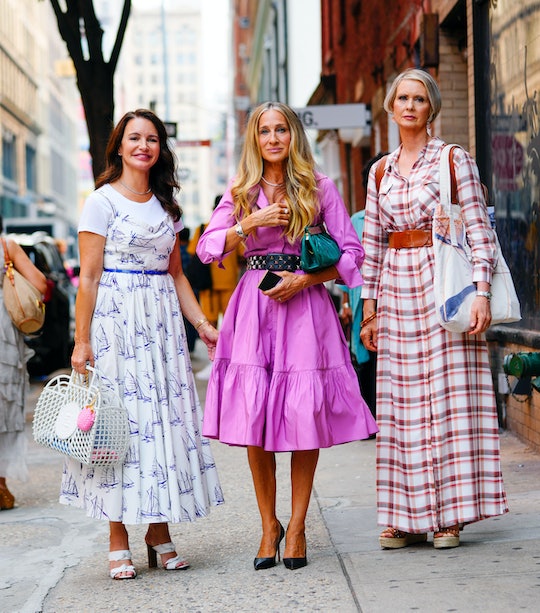 Sex & The City Is Apparently Now A Show About Parenting Teens

I couldn’t help but wonder... how will they find the time for cocktails?

Brace yourself, folks. The Sex and the City reboot, And Just Like That... coming to HBO Max, sees the ladies parenting teens. And I think we can all agree that this is going to significantly change their Sunday brunch chats. As for cocktails and wild nights on the town? The shoe could well and truly be on the other foot, if these TV teens are anything like the real-life versions.

Fans of Sex and the City all remember when high-powered lawyer Miranda Hobbes found out she was pregnant in Season 4 of the original series. She didn’t know if she would keep the baby, didn’t know if being a mom was what she wanted. She considered having an abortion but decided against it, the whole thing was very emotional. She and her ex-boyfriend, Steve Brady, ultimately welcomed Brady Hobbes, and lived happily ever after. Ish.

Then there was Charlotte York-Goldenblatt’s parenting journey with husband Harry that spanned several seasons of IVF treatments, pregnancy losses, and eventually, an adoption in the final season that brought her daughter Lily from China as well as a surprise pregnancy in the movie, where Charlotte gave birth to Rose.

The original HBO series was really all about the women. Now, it looks like things are going to change. On Tuesday, the Instagram page for the new reboot, And Just Like That..., shared photos of Brady, Lily, and Rose. As full-fledged teenagers.

Brady Hobbes is now a teenager.

Niall Cunningham from Life In Pieces has taken over the role from the original actor who played Brady Hobbes, Joseph Pupo. The last time fans saw Brady was in 2010 when he was in grade school in the Sex and the City 2 movie. Now Brady has a girlfriend named Luisa Torres, played by Cree Cicchino, so that should make things interesting.

As for Lily York-Goldenblatt, she is being played by Cathy Ang from Netflix’s Over The Moon. She was also in grade school in the last movie installment of Sex and the City, a few years younger than Brady. Lily was originally played by twins Alexandra and Parker Fong.

Finally, the youngest of the group, Rose York-Goldenblatt, is being played by Alexa Swinton from Billions.

What’s more complicated than raising teens and trying to live a life of your own, I ask you?