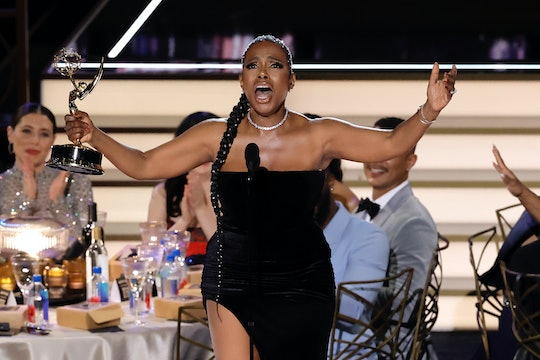 “This is what striving looks like and don’t you ever, ever give up on you.”

When veteran actor Sheryl Lee Ralph finally, finally won an Emmy in the Best Supporting Actress in a Comedy Series category for her role in Abbott Elementary on Monday night, she really should have been given a second award for her speech. Because it was at once personal and universal, inspiring and heartfelt. In short, it was the most iconic speech of the night. Delivered by an actress who knows what it is to triumph at last.

Before delivering her speech, Ralph sang “Endangered Species” by Diana Reeves as the audience cheered, the words feeling especially significant. “I am an endangered species, but I sing no victim's song. I am a woman, I am an artist. And I know where my voice belongs.”

Ralph has been diligently working away as an actress for five decades, on Broadway and in movies and television, amassing an impressive body of work before coming to her role as veteran teacher Barbara Howard on Abbott Elementary. And she made it clear, not just during her speech but ever since she first found out she was nominated, that she does not take this moment in her life for granted.

Her 30-year-son Etienne Maurice shared a video of her reaction to finding out she was nominated while they were in Jamaica, and her genuine shock and disbelief at being recognized was beautiful. As was the sound of her proud son’s voice screaming “Yes, mommy!” in the background of the video he captioned, “with over 50 years of being in this thing we call showbusiness, today my mother became an Emmy nominated actress. i’m so proud of @thesherylleeralph. I’m so glad I could be here in Jamaica with you for this moment.”

A woman who put in the work. Whose family is in her corner. Who is willing to share her advice and joy and struggle and power with her fans. This is a star.