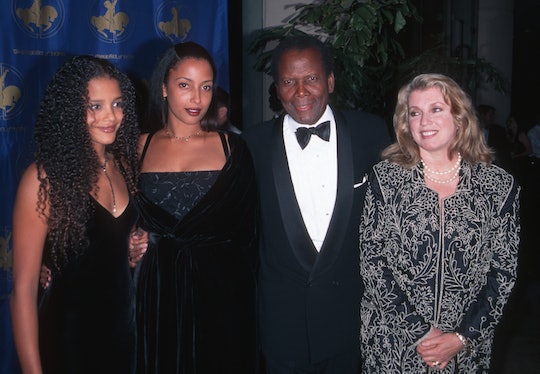 In addition to being one of the most iconic actors of our time who became the first Black man to win a Best Actor Academy Award, Poitier was also a hands-on and devoted dad to his six daughters.

On Jan. 7, legendary actor Sidney Poitier died at the age of 94 years old, according to an announcement by Bahamian Minister of Foreign Affairs Fred Mitchell. He was the first Black man to win a Best Actor Academy Award for his role in the 1964 movie Lillies Of The Field, and only the second Black person to win an Oscar ever. He was a passionate civil rights activist, so much so that Dr. Martin Luther King Jr. paid tribute to him in 1967, noting Poitier “is a man of great depth, a man of great social concern, a man who is dedicated to human rights and freedom.” He was an icon, a legend, and most of all, Sidney Poitier was a husband and father to six daughters.

He Married Joanna Shimkus In 1976

The Blackboard Jungle actor married Canadian actress Joanna Shimkus in 1976. The pair met when they were filming the movie The Lost Man in 1969, going on to marry and welcome two daughters together. They have been married ever since; Poitier spoke to Closer Weekly about Shimkus in 2020, saying, “There is one key ingredient my wife has helped me to recognize over the years, and that is the importance of articulating love for one another on a daily basis.” For her part, Shimkus told the outlet that her husband “is the most wonderful, generous, kind, honest man with the most integrity that I’ve ever known in my life.”

Poitier was first married to model and dancer Juanita Marie Hardy in 1950 until the two divorced in 1965. Hardy and Poitier had four daughters together before they parted ways.

Clearly Poitier was a very involved dad to his girls. Daughter Sydney opened up to The Hollywood Reporter in 2013about how she and her sister Anika would tease Poitier when they were younger, “We would put barrettes in his hair and then we’d make him call room service. So room service would come and he’d have to open the door with pink barrettes and lipstick on.”

Poitier’s oldest daughter with Hardy is Beverly Poitier-Henderson, a jewelry designer living in Georgia. She also wrote a book in 2001 called Nana, which was based on people she knew in her life, per Vidette Online, “The idea came from a lot of places — from a little old lady I knew at church, members of my family and things like that.”

Pamela Poitier followed in her father’s footsteps to become an actor, starring in the 1980 movie Stir Crazy as well as other movies. In recent years, however, Pamela has reconnected with her father’s Bahamian roots and lives on Cat Island, where he was born, The List reported. She is a passionate environmentalist, making a documentary called Islands Of Life about conserving the ecology of the islands.

Sherri Poitier also started out acting, much like older sister Pamela, with a role in the 1977 movie A Piece Of The Action. She shifted gears and has since become a chef, according to The Hollywood Reporter.

Poitier’s daughter Gina Poitier-Gouraige was an administrative assistant who married her high school sweetheart, Gaetan Gouraige, in 1988, according to The Hollywood Reporter. The couple went on to have four children together; sadly, they lost their son Emmanuel, although no details were shared about the cause of his death. In 2018, Gina herself passed away at the age of 57 years old. Her family did not share details about her death either, noting only in her obituary, “It is a gross understatement to say that she will be missed,” per Northside Chapel.

The fifth daughter of Sidney Poitier and oldest from his marriage to Shimkus, Anika Poitier continues to work in the entertainment industry. She is a writer, director, and actress, known for her roles in the 2004 movie Swordfish and directing shorts like 2011’s Black Irish. Anika is married and a mom of one.

Sydney Poitier-Heartsong is an actress.

Sydney Poitier-Heartsong was named after her father and, just like many of her sisters, caught the acting bug from him. She has had recurring roles on Chicago P.D., Carter, and Homecoming, as well as being featured on the original Veronica Mars. Sydney is married to musician Dorian Heartsong and is mom to daughter A’Zalia Delancey Coffey.

In 2013, Sydney told The Hollywood Reporter, “We’re blessed to have him as a dad. The world knows him as this iconic, legendary, historical figure. But he’s also just a really, really good dad.”

Sidney Poitier leaves behind an immeasurable legacy that the world, and most of all his family, will always remember.

More Like This
Kristin Bell Shared Some Sweet, Rare Photos Of Her Daughters From A Family Vacation
Adrienne Bailon & Israel Houghton Welcome A Baby Boy Via Surrogate
Princess Charlotte Had A "Lovely" 7th Birthday, According To Her Parents
Solange Knowles Is Making History In The New York City Ballet