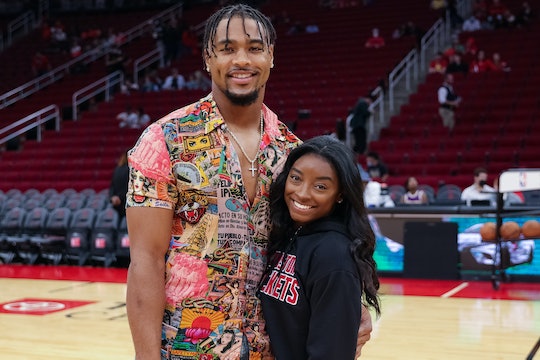 The couple got engaged earlier this month!

Simone Biles is in wedding bliss and already manifesting family plans for the future. The Olympic gymnast answered some fans’ questions on her Instagram Story last week about her engagement with NFL player Jonathan Owens. And one of them was about family and if the couple planned to have kids.

“God willing one day, but taking everything one step at a time. Definitely future plans,” she responded on her Instagram Story, adding, “So, I want two kids. He always says he wants a football team, but he usually says three. We’ll see.”

Biles and Owens announced their engagement on Feb. 15. Days later, the Olympian shared a heartwarming video of the engagement. “I can’t wait for this new chapter of life with you, I’m honored to be your future wife,” she captioned the video. “I love you so much Jonathan James Owens!”

Like many nowadays, the couple met on a dating app in 2020. They became official that same year. Biles told the TODAY Show the two instantly clicked when they met. “We clicked really really well in the beginning because we're athletes and we have the same busy schedules,” she told TODAY. “But other than that, since it was kind of a Covid relationship. We're with each other 24/7, so I feel like now when we're not with each other it's almost weird. We're always texting or calling each other. It's kind of gross in a way.”

Biles, who has three bulldogs herself, even got love from Owens’ four-legged best friend. “My dog really loved her," the Houston Texans’ player told TODAY. “I could kind of see his face like whenever I would pick my bookbag up in my apartment, he would think we're leaving to go to her place, so he would sprint to the front door. And I'd be like, 'Huh, you really like her!”

Regarding wedding plans, Biles shared on her Instagram Story it will be a beach destination. And hopefully their family of pups will have some roles on their wedding party. Fingers crossed!