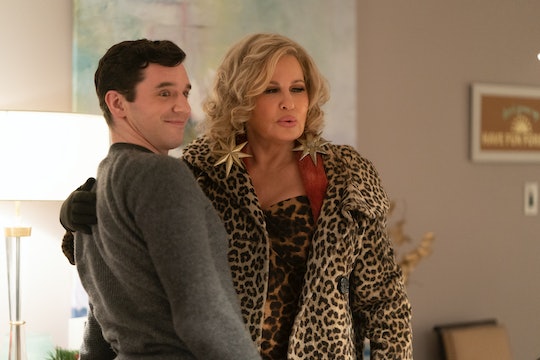 First of all, it stars the iconic Jennifer Coolidge.

There are so many romantic comedy tropes out there that some might find a bit tired. Unless, of course, they are told from a totally fresh and wonderful perspective, like Netflix’s new holiday movie Single All The Way. While the storyline is a tried-and-true favorite rom-com trope, Single All The Way is extra special for two reasons: it’s the first gay holiday rom-com on Netflix and it stars none other than Jennifer Coolidge.

Single All The Way Tells A New-Old Story

Single All The Way tells the story of Peter, who is heading home to spend the holidays with his Christmas-obsessed family as a single man. Again. His parents want him to be in a relationship, so he enlists his best friend Nick to come along and pretend that they’ve fallen in love after years of friendship. Nick agrees and is welcomed into the family with open arms. Everything seems to be going well until Peter’s mom sets him up on a blind date with a handsome man named James, and then Nick finds himself wondering if he feels more for Peter than he realized.

The trailer for Single All The Way sees Peter’s family super excited to have Nick there and then, as so often happens in a good rom-com, getting involved to push the friends together. In one scene, Peter’s sisters pretend to need his bed so he has to climb in with Nick, and Peter’s dad telling Nick, “I always thought that you and Peter should be together.” Will they end up together? Will Peter choose James? Time will tell.

The trailer for ‘Single All The Way’ looks great.

The Movie Has An All-Star Cast

The cast for this movie could not be more perfect. Michael Urie stars as Peter and Philemon Chambers stars as Nick. Kathy Najimy is Carole, Peter’s mom, while Luke Macfarlane plays James. Other members of the family include Barry Bostwick as Peter’s dad Harold, Jennifer Robertson as sister Lisa, and finally... Jennifer Coolidge. Who plays Aunt Sandy.

Folks on Twitter are already excited about Single All The Way for so many reasons. For one thing, people are ready to see some representation in feel-good holiday movies. “Are we FINALLY getting all the trite, boring love stories BUT IN GAY?? YES PLEASE!,” wrote one Twitter user. Another got excited about the snappy dialogue in the trailer and some great one-liners, “There are so many iconic lines on this trailer, but ‘he is a ten in New Hampshire’ took me out.”

Above all, people are just ready for a gay holiday rom-com to happen, especially when it’s as predictable a storyline as ever. “We already know the end… cheesy plot and all! I can’t waiiiiit! LETS GOOOOOOO,” wrote one Twitter user.

One thing everyone seemed to agree on — Jennifer Coolidge. Twitter was super excited to see her in the trailer and didn’t mind sharing the love. Especially since she seemed to be so self-aware in one scene. Coolidge’s character is quoted in the movie saying, “The gays just know how to do stuff. And for some reason they’re always obsessed with me.” One Twitter user noted, “Jennifer Coolidge speaking the God's honest truth in Netflix's gay holiday rom-com, Single All The Way.”

Jennifer Coolidge stars in ‘Single All The Way.’

Single All The Way Will Premiere In December

Single All The Way will premiere on Netflix on Dec. 2. Obviously put that day aside to bake some cookies and settle in with your friends for a watch party. It’s what Jennifer Coolidge would want.