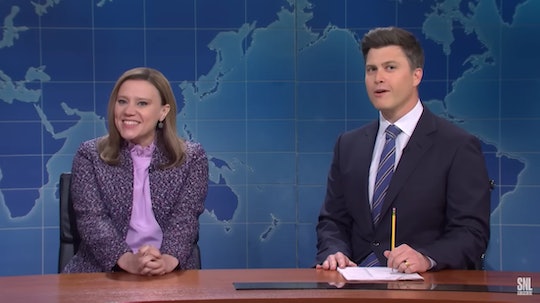 Saturday Night Live has always been known for working the week’s biggest headlines into their satirical repertoire and the leak of the Supreme Court’s draft of the ruling to overturn Roe v. Wade was no exception. While the cold open about the medieval law Justice Samuel Alito cited in his majority opinion draft was top notch, Kate McKinnon stole the show when she appeared as Amy Coney Barrett on “Weekend Update” to discuss the draft with Colin Jost and offer some super-sound, totally reasonable advice to women throughout the country.

“Barrett” appeared chipper and smiley as Jost introduced her to the audience. When he noted her good mood must be on account of the majority opinion, she replied, “Well, I don’t know what would make you say that other than everything I’ve ever said.” Her merry tone continued throughout the discussion, during which she said she couldn’t see a logical reason for abortion when a woman can “leave a baby anywhere” (some of her suggestions — a sidewalk, a mailbox, a Ferris wheel, to a stork so the stork can give it to a lesbian — got hilariously absurd). Her advice? “Just do the nine and plop.”

The entire sketch is full of gems that highlight the ongoing need for abortion rights, the ridiculousness of saying carrying a pregnancy to term is no big deal because adoption exists, and the flimsy arguments that have been held up in an effort to justify undoing the law, all juxtaposed against her casual “just do the nine!”

McKinnon as Coney-Barrett encourages women to “do their nine.”

Of course, while the sketch was funny, the reality is less so for abortions rights activists or anyone who considers themselves pro-choice.

When former President Donald Trump nominated Barrett to replace Ruth Bader-Ginsberg on the Supreme Court, experts already began to worry about the fate of Roe. While Trump argued that she had not weighed in on abortion rights one way or the other (which was technically true), her judicial record included two cases — Box v. Planned Parenthood of Indiana and Kentucky Inc. and Commissioner of the Indiana State Department of Health v. Planned Parenthood of Indiana and Kentucky Inc. — in which Barrett voted in a way that could be seen as favoring or supporting abortion restrictions. Moreover, she was on the record as saying she believes life began at conception in a 2013 issue of Notre Dame Magazine. Since her appointment to the Supreme Court, Barrett has only voted on one case concerning abortion — when she voted in favor of allowing Texas “fetal heartbeat” law to take effect.

While Roe is, as of today, still the law of the land, the official court ruling is expected to be handed down this summer. Should the majority ruling hold, a majority of states would likely ban abortion. Only 16 states and the District of Columbia protect abortion rights by law.