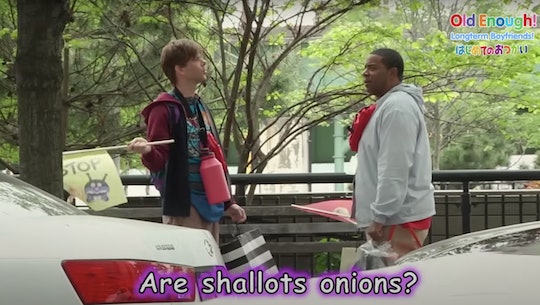 And burns your long-term boyfriend too!

Selena Gomez and SNL knocked it out of the park with a hilarious and relatable skit that poked fun at the popular Japanese reality show streaming on Netflix, Old Enough, which follows adorable toddlers going on solo errands to the delight and worry of their watching parents. With a mock sneak-peek of a remake of the reality show, the funny promo swapped out the little tykes for another surprising demographic. Reasoning that Americans don’t send kids out into the streets alone, this version of the reality show honed in on an equally helpless group who struggle with doing things all by themselves — long-term boyfriends.

Previously the most-followed woman on Instagram, Gomez nailed it with her portrayal of Kelsey, a boo-ed up and wine-guzzling Manhattanite. She bravely sends her 34-year-old, video game and adult-LEGOS-obsessed boyfriend out on an errand (gasp) — without her! “Matt, I’m going to need you to go out and get a couple of things for me, okay?” Gomez asks extra slowly like a kindergarten teacher speaking to a frightened 4 year-old.

Dressed in his big boy hoodie and armed with a bright yellow flag to carry (as the toddlers often do on the original show), Matt (played by Mikey Day) mans up for his big errand. He even has his water bottled in case he gets parched! Matt’s big task is to walk four whole blocks to Sephora to pick up some make-up and then swing by the market.

Matt makes it through the mean streets of NYC, but starts to cry when he gets to his first stop. Good thing he is able to ask the salesperson for help with a little tug on her shirt sleeve. Like the Japanese version of the show, the camera pans back to Gomez’s character, who watches footage along with the audience, bearing high hopes for the successful voyage.

One of the funniest parts of the skit is when Matt meets up with another long-term boyfriend on an errand, Keenan Thompson, playing another hapless chump picking up dry cleaning (“and a cream that cost $80”) for his solo excursion. The long-term boyfriends awkwardly introduce themselves and when Matt shares his age, Thompson’s character responds with a pretty hysterical: “I’m 38 and a 1/2.”

Sadly for the televised couple, Matt’s failed errand (he buys two huge pound bags of onions instead of two shallots) leads to Gomez’s character’s realization that it’s time to break up with her incompetent man-child. The final nail in the relationship coffin — when Matt turns down his girlfriend’s offer to get it on because: “It’s like, light outside.”

It’s probably smart that “Kelsey” dumped her dude before they proceeded to matrimony when things might only devolve further. SNL got very right with so many women already know: there’s a whole lotta men (god love them) who will pick up the wrong milk every time, no matter how clear the shopping list. Welcome to the tragicomedy of dealing with an adult partner who can sometimes seem like your neediest kid, and can probably (okay, definitely) use these keen survival tips courtesy of some pretty resourceful toddlers.

More Like This
'Caillou' Is Officially Getting A CGI Reboot Whether People Like It Or Not
Viral TikTok Breaks Down How Beautifully Bluey Depicts One Character’s Infertility
The Summer I Turned Pretty Is A Beautiful Coming-Of-Age Story For Teens & Parents
Exclusive: 'Bluey' Celebrates Father's Day With A Look At Bandit's Best Moments