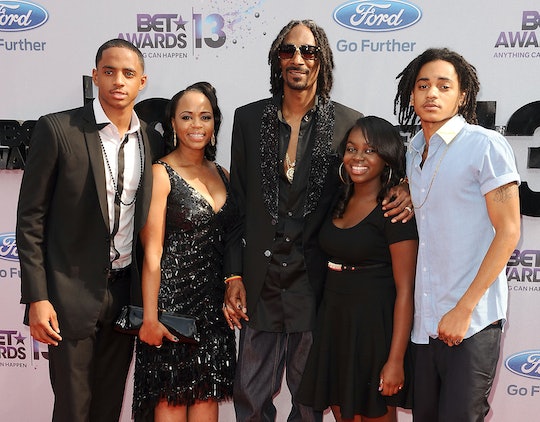 Grandpa is in the Halftime show.

When Snoop Dogg takes the stage at Super Bowl LVI on Feb. 14, it will be his first time performing at the Super Bowl halftime show. He’ll be joined by his fellow hip hop legends Mary J. Blige, Dr. Dre, Eminem, and Kendrick Lamar. And he’ll be cheered on by millions of fans including his own children. Perhaps even his grandchildren.

Because Snoop Dogg is indeed a grandfather.

It hasn’t been an easy road for Snoop Dogg and his wife of 24 years, Shante Broadus. The couple have weathered many storms, including a murder trial for the rapper in the ‘90s and even a breakup in 2008 after reports of his infidelity. But they have managed to make it through and come out the other side happier. The “Drop It Like Its Hot” rapper told GQ in Dec. 2021 that if he ever retired from music, he would trust no one but wife Shante with his business. “That’s my backbone, that’s my heart and my soul, that’s the one that I love the most, that I trust the most,” he explained.

They’ve certainly seen it all with each other, both as a couple and as parents to three children together.

Snoop is a grandpa.

Snoop Dogg’s oldest son is Cordé is actually a dad of three himself; daughter Elleven and son Skylar with partner Soraya Love and son Zion with a previous partner. Sadly, Cordé lost his other son Kai in 2019 when he died in his arms at just 10 days old. A tragedy the whole family certainly felt.

Cordell takes after his dad.

Much like his dad, son Cordell Broadus has enjoyed some celebrity in his lifetime. He played football for UCLA as a wide receiver and went on to be a model for labels like Ralph Lauren. Cordell is also a dad of two kids with wife Phia named Cordoba and Chateau.

Snoop Dogg is a proud dad.

Julian is the son of Snoop Dogg and his previous partner, Laurie Holmand. He works as a luxury real estate agent in Los Angeles and, like his older brother Cordell, a serious athlete. Julian played basketball for Kobe Bryant’s Mumba Academy when he was younger... the talent just keeps on coming.

Cori is following in her dad’s footsteps.

The youngest member of the family and the only girl, Snoop’s daughter Cori is also the only member of the family to follow in her father’s musical footsteps. She and mom Shante provided vocals for Snoop Dogg’s 2012 album Reincarnated, and since then Cori has been working on her own musical career as a young artist, calling herself Cori B.

Who knows, maybe someday she’ll join her dad at the halftime show. Along with all of his grandkids.