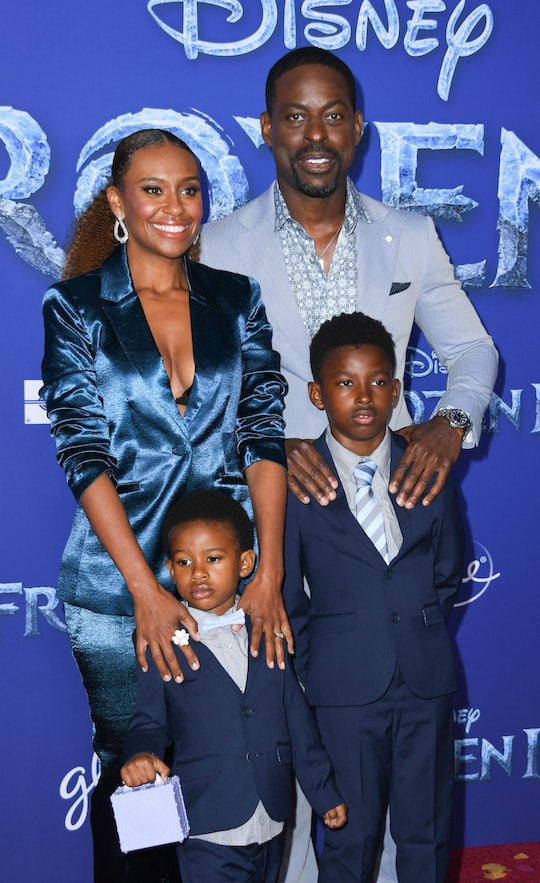 Sterling K. Brown Is A Proud Dad Of Two Sons

“Our goals as parents — my wife and I, as a collective — is to show our kids what our marriage is, good, bad, and ugly...”

His Wife Is An Actress

Sterling, 45, is married to Ryan Michelle Bathé. The couple has a lot in common; for one, they’re both actors and are St. Louis natives. In fact, they are so close, Sterling shared with Entertainment Tonight in 2018 that they were also born in the same hospital and their parents went to rival high schools. Bathé is best known for her roles in Girlfriends, ER, and The First Wives Club.

The two met in college, according to Oprah Daily. Brown was attending New York University and Bathé was at Stanford University. They dated on and off over the years until finally deciding to make it official in 2004 and tying the knot in 2007. “I love actors so much, I decided to marry one," Brown said during his acceptance speech at the SAG Awards in 2018. “You're the best scene partner a brother's ever had.”

Brown and Bathé have been on the same shows together, but never on the same screen. Bathé’s This Is Us character, Yvette, appeared in flashbacks as a friend of the Pearson family. She’s also the woman who helps Rebecca with raising her Black child. Bathé also appeared as the girlfriend of Kellie Martin’s character CPT Nicole Galassini in Army Wives, which Brown appeared in as well.

But one fun fact about their collaborations is that they rehearsed together. “We've learned that there are certain minefields and pitfalls in our relationship, like a slalom, we just move right past them, rehearsing together is one of those things,” Bathé told E! News in 2017.

They Have Two Sons

Brown and Bathé are parents to sons, Andrew, 8, and Amaré, 5. As a parent, Brown is conscious of his work and the legacy he is leaving behind for his boys. “I know one day, when they’re old enough, my children will see my body of work, and I hope they’re pleased with what they see,” Brown told Parents. “They also have a tremendous sense of play that is awesome to be in the presence of. What they do naturally is what I attempt to recreate in front of the camera.”

Both Brown and Bathé strive to have an authentic approach to parenting. In other words, no sugarcoating. “You think you’re doing your children a service by keeping certain things from their purview. But they’re smarter than what we give them credit for,” Sterling told Vox in 2019. “They know what’s happening, and they’re going to have to interpret it for themselves if you don’t show them all of it.”

“So, our goals as parents — my wife and I, as a collective,” he added, “is to show our kids what our marriage is, good, bad, and ugly, so that it’s not idealized in their minds, but something that they want to strive towards because they see two people who are in constant communication, who are working to be better as individuals and as a couple. You’ve got to model sharing for them.”