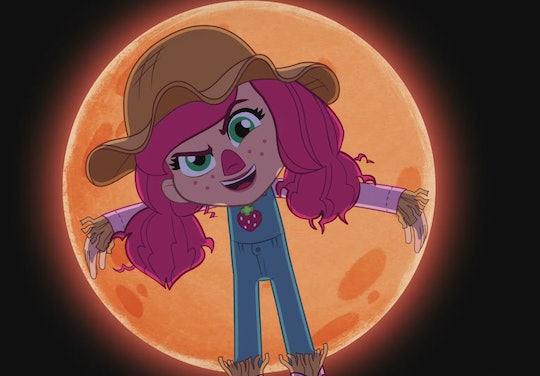 Can Strawberry Shortcake save a boring Halloween party with her scarecrow costume?

In “Fright-Fall,” Strawberry Shortcake overhears Raspberry Tart and the other Mean Berries saying they didn’t think she’d have the guts to show up to Berryworks’ annual Fright-Fall Ball in a costume. But as it turns out, Strawberry Shortcake loves costumes and easily puts together a frightening scarecrow costume.

“Fright-Fall is all about being scary and a scarecrow literally scares crows,” Strawberry Shortcakes tells her cat Custard in the episode.

Unfortunately, when Strawberry Shortcake arrives at the party, she learns she’s been tricked. It isn’t a costume party at all, it’s Peach Trifle’s fancy dress Fall Ball. “This is my nightmare,” she exclaims after realizing she’s the only one in costume. But while Peach Trifle’s party may be fancy, it’s clearly not any fun. Some guests have even dozed off. Can Strawberry Shortcake save this boring Halloween party?

Watch the episode below!

WildBrain’s new series, Berry in the Big City, reimagines the beloved character Strawberry Shortcake for a new generation of children. In the series, Strawberry Shortcake is a young entrepreneur with big dreams of making it as a top baker. She leaves her small town of Berryville to run her own food truck business in Big Apple City’s trendiest neighborhood. Along the way she meets Orange Blossom, Lime Chiffon, Lemon Meringue, and Blueberry Muffin — four girls who become her “berry besties.”

More Like This
Exclusive: Watch How A Group Of Princesses Save The Day In Netflix's New Animated Series
Watch An Exclusive Sneak Peek At 'The Amazing Maurice'
10 Great Podcasts That Will Keep Your Kids Entertained On Your Next Family Road Trip
Marcel The Shell Is Heading To The Oscars!
What Parents Are Talking About — Delivered Straight To Your Inbox