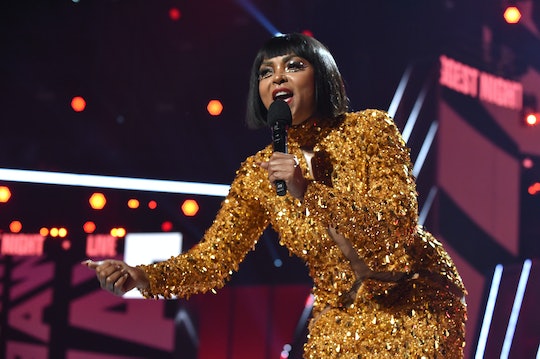 Taraji P. Henson Says “Guns Have More Rights Than A Woman” At The 2022 BET Awards

The actor and mother delivered a powerful message.

Taraji P. Henson stepped onto the 2022 BET Awards stage looking like a golden goddess as this year’s host. She opened the show with exuberance and admiration for Black excellence when she kicked off her opening monologue. Henson was upbeat and humorous, but also infused the moment with seriousness when she commented on the Supreme Court’s recent decision to overturn Roe v. Wade as well as the proliferation of gun violence in this country. The Empire actress and mother was not afraid to get political when she made the powerful statement that “guns have more rights than a woman.”

Henson started the show by welcoming the audience and inviting everyone to get out of their chairs and stand up. “This night is for you, baby.” She was upbeat and also cracked some jokes. “Y’all making culture’s biggest night looking like a room full of luxury. You look successful, expensive. You look like you can afford these gas prices.”

“We’re going to celebrate, recognize and honor us. And everything that we do. Let tonight be a reminder that we don’t need any other shows to give us accolades we can give ourselves,” continued Henson, who knows a thing or two about being overlooked. Henson was famously snubbed for her role in the movie Hidden Figures where she played Katherine Johnson, an American mathematician whose calculations were critical to the success of NASA’s first crewed spaceflights.

BET posted the entire monologue to its YouTube channel with the apt caption: ”Nobody Slays A Monologue Quite Like Thee Taraji P. Henson 💅🏾.”

Henson also gushed about musical show-opener Lizzo and her awesome performance of “It’s About That Time.” Lizzo was another fashion standout dressed in a gold and rocking a disco ball-inspired jumpsuit during her signature flute solo. “That’s how you start a show,” said Henson of her pal’s performance. “All this body positivity up in here.” She also praised Lizzo’s $1 million pledge to Planned Parenthood in collaboration with Live Nation.

While Henson is clearly passionate about women’s rights, she also took the time to elevate Black men. “This night is for my kings. Black men, we love you. We hear you. And throughout the show, we’re going to celebrate you.” Lifting up Black men is an issue close to Henson’s heart as the actor and director is also a mother to 28-year-old Marcell Johnson. Henson shared her only child with the late actor William Lamarr Johnson who was tragically killed when her son was only 9 years old.

While Henson is of course known for her acting chops on both TV and the silver screen, she is also admired for her impressive academics. Henson received an honorary doctorate and delivered the commencement speech at her alma mater Howard University. Whether she’s got the spotlight on her at one of entertainment’s biggest nights or is giving a stirring graduation speech to rapt graduates, one thing is certain — Dr. Henson knows how to captivate an audience with her powerful words.

More Like This
Pregnant Chrissy Teigen Cracked A Joke About Trump As She Shared A New Ultrasound Photo
Dr. Jill Biden Just Delivered Some Frank, But Powerful, Advice On Motherhood
Breonna Taylor's Mom Spoke Out About The Four Officers Arrested In Her Daughter’s Death
Georgia Says A Fetus Is A Dependent For Tax Returns At 6 Weeks