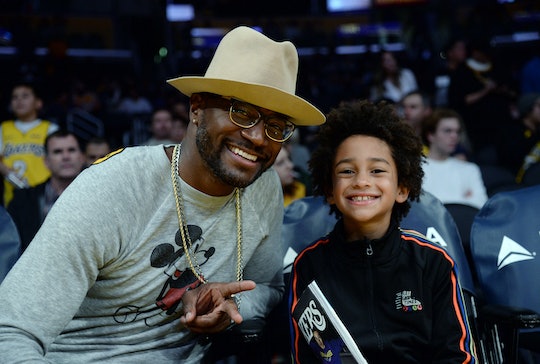 “I just wanted him to give his blessing...”

Actor Taye Diggs has a children’s book out now. The 51-year-old recently released his Why?: A Conversation about Race with illustrator and friend, Shane W. Evans. The story addresses social activism from the eyes of young Black children. In the age of debates about critical race theory and book banning, reading is not only fundamental but even more important for children of color today. Understanding that complex, Diggs wanted to make sure the young audience he was trying to reach would be proactive to it, so he asked his 12-year-old son, Walker, to share his thoughts about the book.

“Before I showed him the book, we actually had, you know, a few conversations about what was going on, you know, in society with Black Lives Matter, so that's kind of what prompted the book,” Diggs told host Tamron Hall during a virtual appearance on her talkshow.

When Hall asked if he cried at his son’s response, Diggs jokingly replied that Walker would've just rolled his eyes if he did. “We watch a lot of TV together and he's really not having it,” the All American star said of Walker, whom he shares with his ex-wife and Frozen star Idina Menzel. “He's a jock, too, so sometimes he's not as sensitive as I would like.”

Why was released on Feb. 1 and is Diggs’ fifth children’s book with Evans. His first book, Chocolate Me, released in 2011, is about Black kids who are teased at school because of their dark skin color. The other books — Mixed Me! and My Friend! — address growing up biracial and living in a split household. And I Love You More Than, written in 2018, is a love letter to a child from a father whose parents are divorced.

And while Walker may have no notes for his dad when it comes his growing collection of children’s books, he’s put a hard rule in place with Diggs’ dating life. During an interview with Access last year, Diggs revealed that Walker said he’s not allowed to date anyone under 26. “I showed him one girl that was on Instagram and he immediately asked how old she was,” Diggs said in January 2021. “[He said], ‘Absolutely not. she has to be at least 26.’ He wouldn’t like it, but she has to be at least 26. He was being generous.”

More Like This
Karamo Brown Teamed Up With His Son On A New Children’s Book To Share A Powerful Message
23 Children's Books For Your Dino-Loving Kid
Quinta Brunson Is Giving Back To The School That Helped Inspire 'Abbott Elementary'
This Mom Gave Birth On Graduation Day, So The University Brought Her Degree To Her