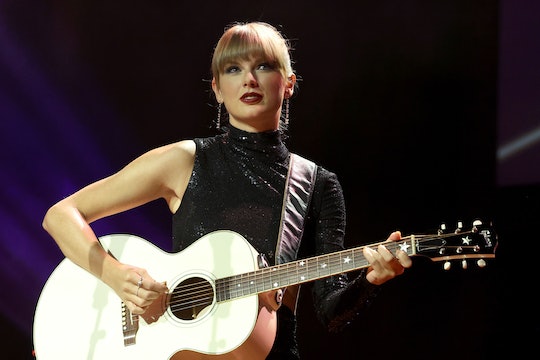 Some of the lyrics hint at pregnancy loss.

Taylor Swift’s tenth studio album Midnights was released this past Friday at (appropriately) midnight. Ever an overachiever, she released seven additional tracks (3am Edition) a mere three hours later. Of course, Swifties are hungry for any insight into the life, emotions, and mind of their beloved queen, and dissecting Taylor Swift songs like they’re the cryptex from The DaVinci Code has become part of the ritual of her album drops. (A fact Swift certainly, smartly, leans into as an artist.) But one song, “Bigger Than The Whole Sky,” in particular seems to have struck a chord (no pun intended)...

Is “Bigger Than The Whole Sky” about miscarriage?

There’s no doubt that the mournful pop song is about loss of some kind, but lyrics hint at a very specific variety: pregnancy loss. Some of the lyrics are somewhat general, including the first half of the song’s chorus

You were bigger than the whole sky.

You were more than just a short time.

But the second half of that chorus, however, is somewhat less nebulous..

If the song is about miscarriage, it’s a pretty on-the-nose description of that particular heartache. At the very least, whatever else she might have meant with those lyrics it certainly fits perfectly to those who have lost a pregnancy.

Swift often draws from her own life... but not exclusively.

Of course, for a lot of people, the big question is: did Swift write this song from a place of personal experience? Or is she writing from the perspective of another character? Certainly, she’s done plenty of both. To be clear, it is absolutely none of our business, but the curiosity — particularly regarding a musicians who is known to put a lot of her personal life into her songs — is understandable.

During her concert special Reputation on Netflix, Swift said that her songs are “usually me just trying to get past something and understand something I’m going through by writing about it.” “All To Well” is famously about her brief relationship with actor Jake Gyllenhaal. Sometimes her songs are more ambiguous. (Some are wondering, for example, whether the new Midnight track “Karma” is about Scooter Braun, who bought her song catalogue, or long-time rival Kanye West. And sometimes Swift’s songs are from a completely fictional perspective. For example, “Betty” from 2020’s Folklore imagines the trials and tribulations of teenagers (who just happen to bear the names of her friend Blake Lively’s daughters, Betty, Inez, and James). “Ronan,” a song about the death of a child told from his mother’s perspective, is about a boy named Ronan Thompson, who died of a neuroblastoma in 2011; Swift was inspired by his mother, Maya Thompson, who wrote a blog about her experiences.

Swift has not divulged anything about the genesis of “Bigger Than The Whole Sky” (again, as is her right) but, certainly, she captures a truth about pregnancy loss that really hits home for many.

“Bigger Than The Whole Sky” is resonating with a lot of fans.

Given the fact that a heartbreaking 10% to 20% of pregnancies end in miscarriage and the fact that Millennial women (aka lots of women who are at an age where they are having kids or at least thinking about it) are a huge segment of Swift’s fanbase, this probably isn’t a surprise.

“When I listened to ‘Bigger Than the Whole Sky’ all I could see in my mind is the baby I lost and this put words to everything I’ve felt since the miscarriage,” tweets @MissFritzy. “I can’t imagine this being about anything else.”

“I’m not gonna speculate anything about Bigger Than The Whole Sky and what it means to her bc it feels too personal but all I can think about is my miscarriage earlier this year and now I’m not well,” says avowed Swiftie @MlDNlGHT13.

Fans are connecting to “Bigger Than The Whole Sky” on a very personal level.

“If you ever have a loved one suffer a miscarriage & want to understand how they feel, listen to Taylor Swift’s ‘Bigger Than the Whole Sky,’” suggests @AnneMillsMD. “Cannot speak to whether this was her intention, but her lyrics crystallize what I & many others have experienced so eloquently.”

“I had a miscarriage in June. I'm not over it. I'm not OK. I haven't been able to put it into words but this song has done it for me. Of course it's subjective but that what it means to me. Thank you @taylorswift13,” @SMReidWrites tweets.

“I had a miscarriage this year and that song has made me sob more times than I can count,” says @gringacomments of the track. “I don’t know if that’s the reason she wrote it (if she’s been or not through that herself), but it’s so fitting it aches my heart but also gives me comfort.”

Whether or not Swift was writing from a place of personal experience (or, indeed, whether or not it’s explicitly about miscarriage), doesn’t seem to change the fact that for many folks who have experienced pregnancy loss, the song rings familiar and true.