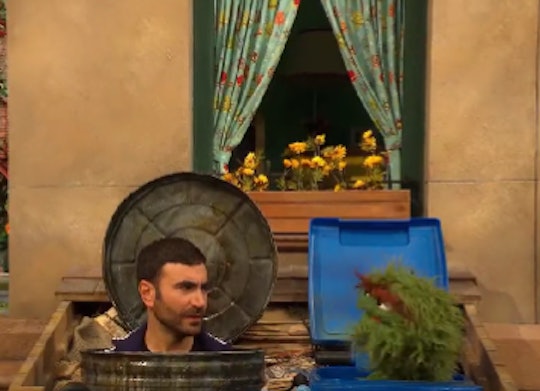 “I told him we had a lot in common. He told me to scram.”

When Ted Lasso makes a casual observation, he knows what he’s talking about. Like when he saw one of his best Richmond players Roy Kent sitting in a big tub of ice, he pointed out casually, “Look at you in there. Looking like a brunette Oscar the Grouch in there.” Now that Roy Kent himself, aka Brett Goldstein, has actually met his doppelgänger Oscar the Grouch, it appears Coach Lasso had it right. The two are a match made in grouchy heaven. Even the way their eyebrows droop low over their eyes when they are refusing to like something... it’s uncanny.

Goldstein recently visited the set of Sesame Street, and naturally his first stop was at Oscar’s trash can. Which, from the looks of the teaser shared by the show on Tuesday, was actually handed over to the British actor while Oscar himself got cozy in a recycling bin. The trailer sees perpetually optimistic Big Bird noting to both Oscar and Goldstein “Isn’t it a beautiful day?”

Perhaps unsurprisingly, the two grouches look at each other and shake their heads, frowning and growling and perfect unison.

Sesame Street posted the video on Twitter with the caption, “Grouches gonna grouch on Sesame Street. Thanks for visiting our neighborhood @BrettGoldstein! We love you!”

For his part, Goldstein shared the video as well with the message, “I met a kindred spirit the other day. I told him we had a lot in common. He told me to scram.”

The love Sesame Street feels for Goldstein is absolutely mutual, by the way. While Roy Kent might be a grouch of the first order, it seems Goldstein himself is a big fan of the muppets. So much so that in 2017 he performed the entire Muppets Christmas Carol movie, complete with songs and everything, in six minutes. That’s dedication. And Brett Goldstein’s deep and abiding love of muppets is just another thing we can all love about him. Even Oscar the Grouch if he just gives him a chance.