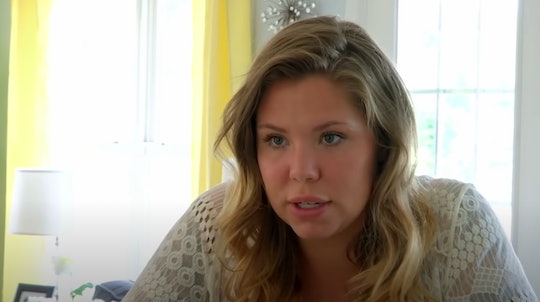 During a recent episode of her podcast, Baby Mamas No Drama, Teen Mom 2 star Kailyn Lowry revealed that she and her four sons have contracted Covid-19 after a recent vacation to the Dominican Republic.

“Once I lost my taste and my smell, I knew what it was,” she said. “I knew.” While Lowry said that her sons are all relatively asymptomatic now, she knew she had it because she “felt like sh*t all week.”

“All of the kids have it, they’re all asymptomatic, really,” Lowry added.

This isn’t the first time that Lowry has had Covid-19. She said that she tested positive after traveling to Iceland while pregnant with Creed in February. Lincoln, she revealed, had also tested positive once before in March. Both Lowry and Rivera said that they had suspected that they had a bad cold or a sinus infection, but the positive tests proved otherwise.

Lowry shared that one of her main symptoms was “extreme fatigue,” which has been difficult while caring for a toddler. “People don’t talk about, too, parents getting sick and how hard that is,” she said. “It’s been so hard the past week, like, just trying to rest, and just having my infant, he’s been a trooper. He hasn’t fought me at bed time or nap time at all, so maybe he’s just like, honestly, the universe — he knows we’re all sick and just doing his best.”

Whether or not Lowry has gotten the Covid-19 vaccine is unclear. The MTV reality star did not mention her vaccination status on the podcast, but she previously expressed her disdain for the vaccine. In April of last year, one follower asked if she would get the vaccine or allow her kids to get it once it is available. “Absolutely not,” Lowry replied.

In 2019, Lowry was criticized when she said on an episode of her second podcast, Coffee Convos, that she had not yet vaccinated Lux. In an interview with InTouch Weekly that same year, she defended her decision. “People don’t love everything I do but I don’t shove my beliefs down anyone else’s throat,” she told the magazine. “I know what’s best for my kids and other parents know what’s best for theirs.”

For now, the podcast hosts said during Tuesday’s episode that they’re ready to overcome their sickness. “We’re almost out of it,” Rivera said. “I’m going to be thankful to be on the other side of this,” Lowry added.