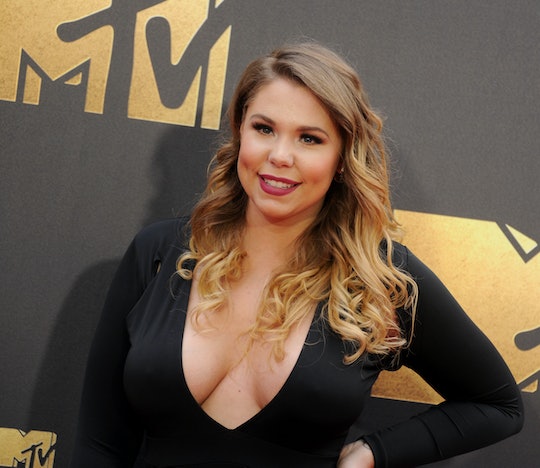 Almost two weeks after giving birth to her fourth child, Kailyn Lowry revealed her newborn son's name in a new Instagram post. The Teen Mom 2 star not only shared the first photo of her little boy on Aug. 10, but she also revealed the sweet meaning behind his moniker.

Lowry revealed that her new son's name is Creed. "Guiding principle," she captioned the photo or her little boy sleeping peacefully in her arms near his crib.

This photo and name reveal comes just days after Lowry welcomed him into the world on July 30. The MTV star revealed to E! News that she had given birth at home to her son little, weighing 8 lbs., 15 oz., and 22.5 inches long. "No name yet but we are all healthy and so in love," she told the news outlet at the time. "I can check off giving birth during a pandemic off my bucket list now."

The name Creed is of Latin origin, according to The Bump, and, as Lowry mentioned in her post, means "belief; guiding principle; I believe." The name has such a beautiful meaning, although some of Lowry's Instagram followers have already drawn a hilarious comparison to Creed Bratton from the NBC sitcom, The Office.

During an episode of her podcast, Coffee Convos, Lowry said that she never pictured herself having four kids, but now she could see herself having more, but not too many. "Six is my max," she said. "I don't think I would have...I'm not confirming or denying, I'm just that I would not have more than six."

Whether Creed is her last or she goes for more, fans can watch her parent her brood of boys when the new season of Teen Mom 2 airs on MTV on Sept. 1 at 8 p.m. EST.