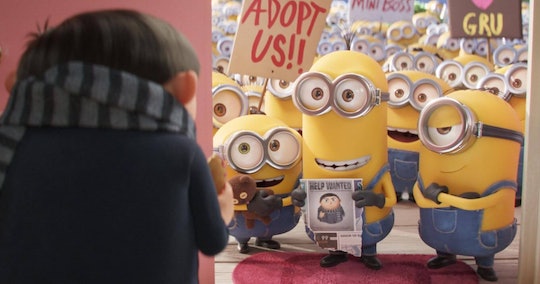 The #GentleMinions have arrived.

If you took your kids to see Minions: The Rise Of Gru over the long holiday weekend, you might have come across some teens dressed in suits. A lot of teens dressed in suits, in fact, all seeing the new Minions movie and perhaps even carrying a banana or two with them as a snack. No, you’re not imagining things. You’ve just stumbled across the “GentleMinions,” a viral trend that has apparently become a bit of a problem for some theater owners across the country.

These dressy teens are going to see Minions: The Rise Of Gru in droves together, all in suits to pay wry homage to Gru and often carrying bananas because that is the preferred snack of the Minions. The trend has exploded on social media as #GentleMinions visit theaters all over the country, and it would seem harmless enough apart from some of the inconsiderate behavior reported by movie theater staff. In an attempt to behave as much like Gru, the evil villain mastermind from the movie, some teens have reportedly taken to being disruptive during the film. Cheering loudly and copying his hand motions throughout. Which might not be so great for little kids who are trying to see the movie unironically.

Certainly the #GentleMinions trend did not hurt opening weekend ticket sales, with Minions: The Rise Of Gru coming out head and shoulders above all other movies at the box office. And it seems many of the teens are really just trying to enjoy a little post-lockdown fun together.

“I saw a couple of videos of people [who] had gone to do the same thing. So me and my friends we just went to the theater,” Obie, a teenager from Maryland, told Variety. “Everyone was really civil, we just kept mannered and watched the movie. It wasn’t until we exited the theater that we saw this other group… It kind of reminded me of the Peter Parker memes, with the different Spider-Men pointing at each other.”

Unfortunately not everyone followed the same rules. Theaters have reported such bad behavior from these “gentleminions” that they’ve been forced to issue refunds to other moviegoers, as reported by The Mirror, with some cinemas in the UK even choosing to ban the teens from seeing the movie entirely after reports of vandalism, verbally abusing staff, and disruptive behavior. Cinema manager Daniel Phillips-Smith told the outlet: “It's been absolutely heartbreaking. We've had families who won't even go back into the screen when we've tried to sort it out, families leaving before the film has even started, and of course the children have been in tears.”

While there have been some reports of teens misbehaving, many of the teens seem to be going out of their way to be thoughtful. There are even videos of them holding doors for people and shaking hands with cinema staff, as the CBC reported. Hopefully those stories will outweigh the others.