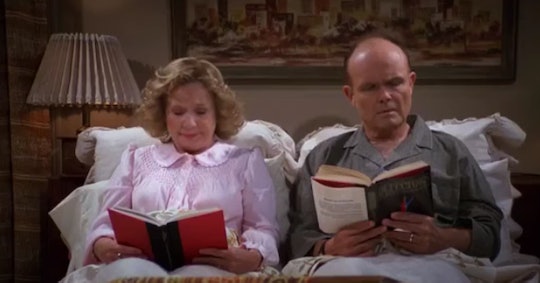 Eric and Donna’s daughter is the new star.

If you’ve been wondering what happened to the Forman family and the rest of the gang from That ‘70s Show, you are in luck. A spinoff is coming to Netflix called That ‘90s Show, and at least two of your favorites have already signed on for the new series. So get ready to be hit with all of those good nostalgic feelings that come from a classic show revisit but also... the ‘90s. We remember you well.

That ‘90s Show Is Coming To Netflix

It’s been 15 years since we last saw that gang from That ‘70s Show for the last time. After eight seasons and 200 episodes, the FOX series said a fond farewell to Eric Forman and his friends and especially his basement. The show launched the careers of several young actors including Topher Grace (Eric), Ashton Kutcher (Kelso), Laura Prepon (Donna), Mila Kunis (Jackie), and Wilmer Valderrama (Fez). And now it seems at least some of the original cast members will be back at the Forman house. Netflix announced that it has ordered 10 episodes of the new series That ‘90s Show, which is based on characters first created in the original series.

Red & Kitty Are Back

Kitty and Red Forman are coming back.

This time around, it’s 1995 and Eric and Donna’s daughter Leia Forman is visiting her grandparents, Red and Kitty, for the summer in Point Place, Wisconsin. First off, please note that the couple appear to have named their daughter after Princess Leia. But I digress. Leia spends the summer with her grandparents and meets some of the young locals, and presumably shenanigans ensue.

While there’s no word yet on whether some of the original gang will be back for the spinoff, at least two important characters have signed on. Debra Jo Rupp and Kurtwood Smith are returning as Kitty and Red Forman.

How Can You Watch?

That ‘90s Show will be available for streaming on Netflix, although no word yet on when the series will actually premiere.

That ‘70s Show is no longer available to stream on Netflix, but you can rent the first season on Amazon Prime if you want a little trip down memory lane as you wait for the new series. Or you can stream The Ranch on Netflix, which stars Kutcher and Danny Masterson (Hyde) and often features cameos from That ‘70s Show co-stars.

Here’s hoping the gang all comes back for That ‘90s Show. And maybe eats some of Hyde’s brownies in the attic.