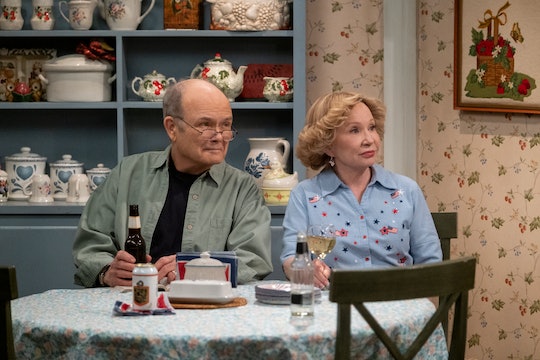 This is not a drill: Eric, Fez, Kelso, Jackie, and Donna are coming back!

A new generation will be sharing smokes and talking about sex inside Red and Kitty’s basement in That ‘90s Show — and there’s going to be some epic ‘90s-style burns. (Talk to the hand, baby!). This is Netflix original series is a spinoff from the iconic That ‘70s Show, which ran from 1998 to 2006 with eight seasons and 200 episodes. If you enjoyed watching the friendship between Eric (Topher Grace), Donna (Laura Prepon), Hyde (Danny Masterson), Kelso (Ashton Kutcher), Jackie (Mila Kunis), and Fez (Wilmer Valderrama), then you’re going to love catching up with their kids in 1995.

Looking for the 411 on this new series? Information about the plot, cast, and release date can be found below.

If you’ll remember, That ‘70s Show ended on the last day of 1979, when Eric and Kelso come home and the gang reminisces about their favorite parts of the decade (Star Wars! Climbing the water tower!). At the end of the series, Kitty (Debra Jo Rupp) and Red Forman (Kurtwood Smith) decide not to move to Florida, and That ‘90s Show will return to their home in Point Place, Wisconsin. It picks up in 1995, when Leia Forman, Eric and Donna’s daughter, visits her grandparents for the summer and hangs out with local teenagers under the watchful eye of Kitty and the stern glare of Red.

We’ll get to see the lives of six new kids.

Smith and Rupp are executive producers on That ‘90s Show, and they will also be reprising their roles as Red and Kitty. The show will also star Ashley Aufderheide as Gwen, Callie Haverda as Leia, Mace Coronel as Jay, Maxwell Acee Donovan as Nate, Reyn Doi as Ozzie, and Sam Morelos as Nikki.

Many members of the legacy cast members are returning.

Fans of That ‘70s Show are in for a treat, because five members of the legacy cast will be making special guest appearances on That ‘90s Show! Grace (Eric), Kunis (Jackie), Kutcher (Kelso), Prepon (Donna), and Valderrama (Fez) will return. Kunis and Kutcher are now married with two children, and it’s going to be so cool seeing how their dynamic will play out on the new show (especially since That ‘70s Show ended after Kelso became a dad with another woman and Jackie starts dating Fez. The drama!).

Masterson, who played Hyde, will not be returning. He is currently part of a sexual assault trial, where he faces a maximum of 45 years to life in prison after being charged with three counts of rape in June 2020. Masterson’s attorney, Tom Mesereau, told Deadline in a statement that the actor denies the allegations. “The people who know Mr. Masterson know his character and know the allegations to be false,” Mesereau said at the time the charges were filed.

There will be 10 episodes.

Season 1 of That ‘90s Show will be a multi-cam show with 10 episodes. If it’s successful, hopefully it will be renewed for another season, unlike its predecessor, That ‘80s Show.

It has the same executive producers as That ‘70s Show.

There is no premiere date yet.

Netflix announced That ‘90s Show in October 2021, but so far, they have not released its premiere date. We know that filming has started though, because Netflix has released a behind-the-scenes picture and some of the legacy stars have posted about them getting back into character.

On May 1, Valderrama posted a video on Instagram of him trying on Fez’s iconic jeans, silk shirt, and matching jacket. He even wagged his finger and unbuttoned his shirt an extra button to reveal his chest hair. “Red?” he captioned the video. “Let’s try this Amédica word again.. #HelloWisconsin Yup, still fits..”

Grace commented, “Missed this guy.” Many other celebrities and fans commented as well, including Kellan Lutz, who said “Yes!! Can’t wait”; Christina Milian, who said, “Haaaa! Awesome!”; and Jamie Chung, who said, “A reel the world absolutely needed!!!!! So good!!!!! Can’t wait to watch.”

On May 1, Grace posted a selfie of him wearing a yellow Point Place t-shirt with the words “Vikings Class of ’77.” He captioned it, “Yup, still fits. #hellowisconsin.”

How many times do you think Leia will get called “Dumb*ss” by Red? As someone named after the feisty Princess Leia from Star Wars (we assume), she’ll probably be able to give it as good as she gets. Especially if she’s just as spunky as her dad with a quick tongue like her mom. That ‘90s Show is going to be TheBomb.com!